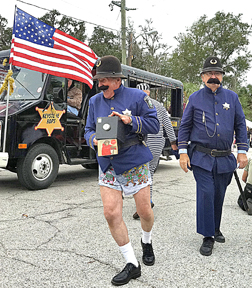 Keystone Cops' criminals and police entry was a crowd favorite in the parade. Bud Hughes, 82, was chased down by "police" when his pants flew off into the camera he was holding.

HAWTHORNE – Children crouched near the street curbs, ready to pounce on the Tootsie Rolls and Dum Dum Pops being thrown onto the street. The mad dash for sugar stopped only when hands flew to their little ears while the  fire engines, sirens wailing passed by.

Hawthorne’s 29th Annual Christmas Festival and Parade brought hundreds of people together to celebrate the holidays and their community. The bleak weather did not deter the 33 vendors from selling both food and fun.

“A Candyland Christmas,” the theme of this year’s festivities, was a dream come true for visitors with a sweet tooth. Candy apples and cotton candy were one of the biggest sellers throughout the day.

Families strolled down 221st Street, stopping by booths that boasted homemade chicken wings, hand-knitted blankets, toy dogs and more. The mingling aromas of barbecue and funnel cakes made for a carnival atmosphere as children got dizzy while spinning in a swing chair ride.

Pirates and fairies emerged from the face-painting booth looking for adventure, while a family of clowns traveled down the street, giggles following them.

Vicki Logan, the entertainment director of the festival, said she wanted to bring in new acts while showcasing the community.

“We’ve had such a great turnout this year,” she said. “Each year we add more and more, and it just makes the event that much more special.”

Musicians and dancers performed each half hour on a stage in front of City Hall. Toddlers from Laura’s School of Ballet twirled and sashayed in pink tutus as parents encouraged them from the audience.

Eyes then turned toward the street, when chunks of wood flew in the air as members of the World Martial Arts Academy kicked and punched holes in boards during a Tae Kwon Do demonstration.

Cheyenne Matthews, 15, was crowned the Teen Queen of Candyland. She beat out two other girls in her division to win her first pageant.

Mayor Matthew Surrency enjoyed these festivities with his wife and two sons, Jacob and Eli. He said the festival has grown a great deal over the past three years.

“I enjoy all parts of it, but my favorite has to be the food vendors,” he said.

At 3 p.m., the crowd separated along both sides of the street, with people choosing prime spots to see the upcoming parade. Babies dressed as elves and dogs wearing holiday sweaters sat patiently while awaiting the first float.

Toothless grins spread across excited youngsters’ faces as police cars and an armored vehicle sounded their sirens while leading the parade. Officers carrying the U.S. and Florida flags solemnly marched at the beginning of the procession.

A camouflaged airboat decorated with Christmas ornaments transported Mayor Surrency as he tossed candy while waving to the crowd.

Each of the 30 floats registered to be in the parade featured unique creative approaches to the “Candyland Christmas” theme.

First Baptist Church combined the candy theme with their devotion to God. Their slogan, “The Sweetest Thing on Earth is Jesus,” used a castle decorated with candies to spread their religious teachings.

Deacon Fred Will was joined with 12 children on the float and passed out sweets to the other children at the parade. John Yocum helped recruit volunteers to construct the float, which took one day to complete.

“We hope the city will enjoy the youth, the float and our message about God during the parade,” Yocum said.

Festivities continued into the night and ended when the crowd encircled the Christmas tree to watch it light up. The ornaments on the tree were crafted by students from Hawthorne’s Shell Elementary.

As the tree’s lights sparkled in the night, young and old celebrated their approval with applause and cheers.

*****For more photos of the parade visit us on Facebook at http://www.facebook.com/ACTNEWS