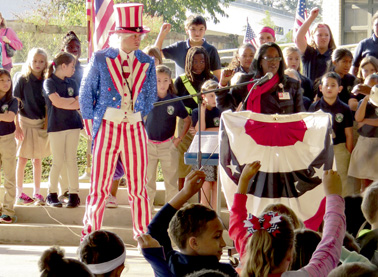 ALACHUA – Patriotic music,speeches dedicated to veterans and American hymns sung by tiny voices all came together to honor about 50 veterans at Alachua Elementary School on the morning of Thursday, Nov. 10.

“I think this is something that lets the students put a face to the meaning of Veteran’s Day,” Assistant Principal Alberta Bing said. “It also gives teachers an opportunity to teach them about it.”

The annual ceremony dates back 20 years, becoming a reality thanks to Alachua resident and D-Day veteran, the late Glynn Markham, according to a Nov. 11, 2011 edition of Alachua County Today. Although Markham passed away in May 2007, his legacy lives on in the numerous veterans’ memorials and services he saw to fruition.

Students were asked by their teachers to request veterans they knew to attend the event.

As the children settled into their seats, Uncle Sam, portrayed by fifth-grade teacher Rick Thomas, fist-bumped and high-fived students.

Another teacher handed out miniature American flags to the children to wave during The Star-Spangled Banner and other patriotic tunes.

A small program bearing the artwork of students Josiah Ashley and Zoe Jeter circulated among attendees. The artwork by Ashley depicted a soldier saluting in front of the American flag and the illustration by Jeter featured citizens decked out in stars and stripes saluting an American eagle soaring over the American flag, complete with fireworks exploding in the air.

A short dissertation on the history of Veteran’s Day was delivered by Uncle Sam.

Numerous tunes, including the catchy and upbeat “Oh, I Love America,” were sung by students during and after the event.

The ceremony came to an end with a moment of silence followed by the playing of “Taps” to honor and remember veterans.

“This is just one small way we can honor those here today and those who have made the ultimate sacrifice,” said Bing.