HIGH SPRINGS – The High Springs Police Department (HSPD) is searching for a burglar who has been active over the past three weeks.
At least six burglaries have occurred at residential and business locations.  The majority of the business-related crimes have happened at night, while residential burglaries have taken place during daylight hours.
“Not all burglary attempts have been successful,” said HSPD Executive-Operations Lt. Antoine Sheppard.  “A burglary alarm went off at the High Springs Emporium, as well as other businesses and residential homes.  That seemed to scare away the intruder.”
During a number of these incidents, a young, white male, smaller built, was seen in the area on a bicycle.
Burglary locations are located in the southern quadrant (Northwest State Road 45), in the northwest quadrant (U.S. Highway 441) and in the downtown area of the city.
Residential burglaries or attempts have occurred at 24600 N.W. 188th Avenue, 18700 N.W. 243rd Terrace and 24500 N.W 172nd Avenue.  Business burglaries have occurred at Community Outreach, the High Springs Emporium, and the Great Outdoors Cafe.
Although the Alachua County Sheriff's Office (ACSO) received a complaint Sunday night on the outskirts of High Springs, “There has been no uptick in burglaries being reported in the county area surrounding High Springs,” said Art Forgay, ACSO spokesperson.
HSPD is taking several investigative measures to apprehend the person(s) responsible for these burglaries and encourage citizens to be vigilant and to report all suspicious activity to law enforcement.  Furthermore, HSPD officials ask that citizens take all preventive measures to ensure that they do not become a victim of a crime.
Anyone having information about these incidents may contact the HSPD at 386-454-1415 or the Combined Communication Center at 352-955-1818.

The forum was organized by various businesses in the area and moderated by Scott Costello, Alachua County resident and owner of Advantage Publishing.

Primary elections will be held Aug. 30 and the general election will be Nov. 8.

Dozens of flyers, brochures and informational packets circulated during the event.

The purpose of hosting the event was to offer a platform for candidates to speak to citizens and share their beliefs and advocate for their cause. The forum’s structure gave each candidate one minute to answer questions raised by audience members.

Perry, the current House Representative of District 21, and Smith, a longtime former State Senator, are both running for State Senate, District 8. Smith said that too many politicians point fingers and blame each other rather than get something done. His platform is “responsibility matters.”

Clemons (R), Lewis (R), and Rogers (R), who are all running for State Representative, District 21, all have a similar conservative idealism.

Clemons believes conservative ideas result in the best solutions. Lewis is a large business owner as part of her family business, Lewis Oil.

Rogers is a pharmacist with the University of Florida Veterinary Hospitals and president of the Florida Pharmacy Association's board of directors.

McGurn, who is taking on current U.S. Representative Yoho, is a Vietnam veteran with a doctorate in real estate from the University of Florida’s College of Business. He said he is running for office to help unify the country.

Yoho’s background includes being a small-business owner. He earned his undergraduate degree in animal science and doctorate in veterinary medicine from the University of Florida.

The three candidates running for Alachua County Sheriff had different viewpoints on what success meant. Zedalis disagreed with Darnell that the Sheriff’s office was doing its best. He said, contrary to her claims, the department was not underfunded and needed to stop asking for money.

“We need get back to the basics,” he said. “You have people sitting in their offices making more than the people actually out in the field doing their job.” Zedalis is running on multiple promises, one of which is reducing the budget by nearly $4 million during his first year.

Darnell has over 30 years of law enforcement experience, however, bringing a large amount of familiarity to the table if re-elected.

Jacobs said he would boost services by cutting waste and red tape while also modernizing the agency’s technology.

Kevin Thorpe, incumbent Mike Byerly’s opponent in the County Commission District 1 race, said it is time for a change.

“Sixteen years is too long for anyone to be in office,” said Thorpe, referring to Byerly. “It’s time for new ideas, time for a change.” 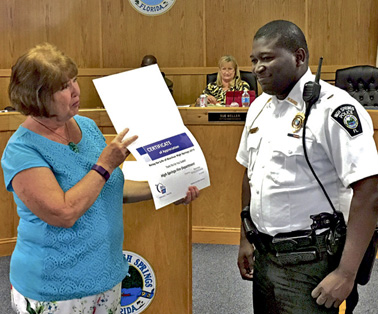 HIGH SPRINGS – Three team captains for city-based teams, which participated in the 2016 Alachua/High Springs Relay for Life, received Certificates of Appreciation for their hard work during the event. The presentations were made at the beginning of the June 23 High Springs City Commission meeting.

Linda Hewlett, a member of the 2016 Relay Leadership Team, presented a certificate for City of High Springs Team Leader Courtney Odum. Recreation Director Robert Basford was on hand to accept the Certificate on her behalf.

“All of our team captains went the extra mile to get the word out to the public and raise money for cancer research,” said Hewlett. “We are very proud of their efforts and wanted to let them know in some tangible way,” she said of the commendations.

GAINESVILLE – Alachua County Supervisor of Elections Pam Carpenter invites registered voters to be a part of this year’s historic elections by working the polls. Poll Workers are needed for both the Aug. 30 Primary Election and the Nov. 8 General Election.

Poll Workers are the guardians of democracy. These are paid positions and training is required.

If you are registered to vote, able to speak, read and write the English language; have transportation to the polling place and Poll Worker training; are not a candidate whose name appears on the ballot; and can work at the polling place from 6 a.m. until after the polls close at 7 p.m., then we need you!

The duties and responsibilities of a Poll Worker include verifying a voter’s identification, address, signature and issuing the correct ballot; conducting the election in accordance with the law; providing assistance to voters as needed; and setting up and packing all voting booths, signs, and supplies on election day.

If you are interested in serving as a Poll Worker, please call the Supervisor of Elections Office at 352-374-5252 or you may fill in the Poll Worker application on our website at www.VoteAlachua.com

HIGH SPRINGS – The qualifying period to run for an open High Springs City Commission seat to be voted on Nov. 8 has been reset.

Candidates may qualify to run for election for Seat #3, currently occupied by Commissioner Sue Weller, by filing with the City Clerk for the City of High Springs during regular business hours from Monday, Aug. 15 - Thursday, Aug. 18.

The winning candidate will serve as commissioner for a three-year term.

Although the election was set by unanimous approval during the City Commission's June 9 meeting, a scrivener’s error in listing the qualifying period caused the City to start the process over again to correct the error and set a new qualifying period.

During the July 14 commission meeting, Mayor Byran Williams opened a public hearing to receive input from audience members on an ordinance amending the Code of Ordinances. Receiving no input from audience or commissioners, Ordinance 2016-07 was unanimously approved. The ordinance modifies the qualifying period for city elections from five business days to four to accommodate the city's four-day work week.

Incumbent Weller previously announced she was running for her seat again at this election.

Anyone interested in running for a City Commission seat must be a resident of the City of High Springs, be a registered High Springs voter and must specify the seat for which they are running.

Filing procedure is for prospective candidates to pick up a qualifying packet from the Office of the City Clerk and name a campaign treasurer. The candidate may act as their own treasurer, if they so choose. Candidates must then open a campaign account with a bank, pay their fees to the Office of the City Clerk and sign a statement attesting that they have read Florida Statutes, Chapter 106, which pertains to campaign financing.

The paperwork and one percent of their anticipated salary must be submitted to the City Clerk’s office by the end of the qualifying period.

Given that High Springs commissioners earn $6,000 annually, the fee would be $60, according to Parham.

Campaign finance reports must be filed by the treasurer each month. Parham said she provides a list for each candidate as to when their reports are due in her office.

If no one else qualifies by the close of the qualifying period, the incumbent will remain in her seat and no city election will be required, although state and federal elections will continue as planned.