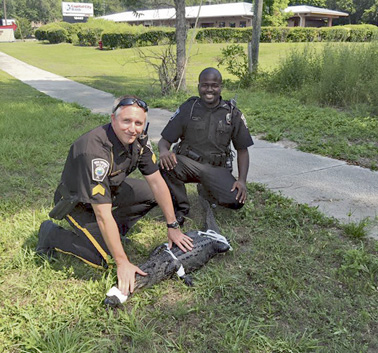 The High Springs Police Department conducted over 100 traffic stops over the Memorial Day weekend holiday. But the incident creating the most interest was an alligator feeding on a dead deer on the side of U.S. Highway 441. L-R: HSPD Sergeant Dustin Shenk and Office Adam Joy responded to the alligator incident.

HIGH SPRINGS – High Springs Police officers had their hands full this three-day Memorial weekend with everything from multiple arrests, traffic stops, an alcohol-related accident and an alligator holding up traffic on U.S. Highway 441.

“It was busy, that's for sure,” said Lt. Antoine Sheppard.

With all the excitement and traffic in the area, the item that garnered the most attention was a video and photos posted on the HSPD's Facebook page of a young alligator feasting on a dead deer by the side of U.S. Highway 441 near Bev's Better Burgers.

“This thing has gone viral,” said Sheppard. “We have had a lot more hits and comments than ever before since we uploaded the videos and photos of the incident,” said Sheppard. “It has also been picked up by WJXT Channel 4 in Jacksonville.”

The incident occurred Monday when a juvenile alligator meandered over to the dead animal along the highway. Cars stopped as the alligator crossed the road.

With assistance from the Florida Wildlife Commission, HSPD officers were able to safely capture the loose alligator as it was becoming a hazard. The gator was moved and relocated to a safe area away from the public.