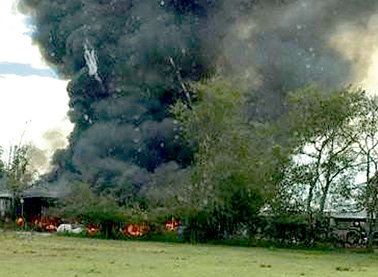 HIGH SPRINGS – On Monday, Nov. 14, the High Springs Fire Department (HSFD) was scheduled to arrive at the GFWC High Springs Women’s Club in the afternoon to offer tutorials and demonstrations about CPR.

Little did they know they would be called to action to put out a massive, fully-involved fire at 27723 N.W. 174th Avenue.

Within minutes, firefighters began defensive operations while battling the blaze. Entry into the structure was not permitted due to unsafe conditions, resulting in the blaze being fought strictly from the outside. . “The contents of the 13,000-sq.-ft. barn included highly flammable oil drums, a vehicle and several pieces of farm equipment. The barn is a total loss and investigation is ongoing,” according to Mangan.

“We could see the column of smoke right when we turned off County Road 340,” said Mangan.

Fighting the fire took the department about half an hour. And firefighter took care to make sure no hot spots, or places where the flames could be rekindled, were apparent.

An additional tanker from Alachua fire rescue was available, however was not needed.

The Woman’s Club CPR seminar will be rescheduled to a later date.