According to an Alachua County Sheriff's Office news release, deputies responded to a 9-1-1 call placed from a residence at SW 135th Place claiming an unknown male, covered in blood, was yelling and banging on the door.

Deputies found 26-year-old Angelo R. Canevari in the front yard of the residence when they arrived. Canevari told the deputies he had shot someone but could not provide any additional information. He was taken into custody while officers began searching the neighborhood for a victim.

An open door to a home was found at 8708 SW 135th Place, and deputies found Lannie E. Greer unresponsive and lying in a pool of blood with significant injuries on the kitchen floor.

Greer was stabilized on scene by Alachua County Fire Rescue personnel and transported to Shands Hospital where he remained in serious condition.

A firearm and ammunition were recovered from the scene, and a search warrant for Canevari's person was obtained to collect forensic evidence. Detectives charged Canevari with aggravated battery with a deadly weapon, and he was transported to the Alachua County Sheriff's Office Department of the Jail.

The investigation into the circumstances surrounding the altercation are ongoing pending Greer's medical condition.

ALACHUA COUNTY – While the Alachua County School District received an “A” for the 2014-2015 school year, individual schools received a broad range of grades.

One marked difference between the most recent grades and those of previous years is that the current grades only factor students’ scores on the Florida Standards Assessment exam, while prior assessments considered learning gains and other aspects of school performance.

Local principals lauded their teachers’ relentless efforts to accommodate to the new exam and their overall dedication to students.

Lynn McNeill just became principal of High Springs Community School this summer. She said one of the reasons why High Springs - the only K through 8th grade school in the county - earned an A is due to the teachers getting to know students on an individual level.

“Nine years we have many of these students, and the staff get to know these children very well,” she said. “What’s special is that there’s maybe a deeper understanding of each individual child by the staff, for the most part, because they're here with us for so long. And other schools don’t have that luxury. “

She also said the vast amount of support the High Springs community extends to the school has contributed to its success.

“I think that we’re a community school in its truest form,” she said. “It really was heart-warming to me when I came here, the sheer number of people that don’t even have children in the school but are here in the community. They live here, have a business here, are part of a church here. That lets me know immediately about all of the things that they’ve done in the past to help the school and all of the things that they’re willing to do."

Eva Copeland, the principal at Alachua Elementary, said her school received a high C, roughly nine points shy of a B.

She said the steps her faculty have been taking are all about professional development and breaking down the new standards.

She also praised superintendent Dr. Owen Roberts for bringing on new initiatives, such as the Fast ForWord reading program, which encourages a more hands-on approach to literacy.

“Some of our kids can learn out of books, but other ones really need to kind of delve in and have hands in what they’re doing,” she said.

“We partner with them, whether it’s through meetings or trainings or what have you,” Fortner said. “[We] make sure we’re all in alignment and working towards the standard like we would if we were third, fourth and fifth [grade].”

She also agreed that the faculty take professional development seriously

“Professional development is key in getting us to move forward in the work that we are doing and so we can impact students achievement – our ultimate goal,” she said. “Making sure that they’re socially, emotionally well – that’s the first.”

She also credited PLC’s – Professional Learning Communities – with effective communication between teachers and staff about what their needs are and what resources are available to help them achieve their goals.

Manda Bessner, the principal at Mebane Middle School said the school earned a B after several years of earning a D.

“I know that our focus for the last couple years has been on language and literacy development for our students,” she said. “The teachers have stepped up to the plate and provided those opportunities for our students."

Newberry Elementary School received a B, a drop from the A the school received the year before. Principal Pearl Pinson said she wants parents to understand that the score doesn’t factor in learning gains, which have been indicative of growth in past years.

She said she hopes the administration at the school will continue to focus on these new expectations.

“For us, I think the big thing is figuring out the expectations of the new standards,” she said. “Once you’ve had a year to see what the test looks like, that’s going to be a huge help for us in making sure that we’re targeting our instruction for what we need. “

Newberry’s Oakview Middle School earned an A after dropping to a C in the 13-14 school year. Principal Kelly Armstrong said he believes the improvement is a result of the teachers at the school working to align their curriculum with the new standards of the FSA exam.

“I think one of the key parts are just teachers really diving in and knowing this new standard that we are held to, who were either on committees with the district [or through] their own personal research and really working to align what we do here with what the State’s asking us to do,” he said.

Even the principals of schools that received an A, such as Newberry High School (NHS), said they were determined to not become complacent, but rather strive for a higher percentage on the grading scale.

“[The A] stems from quality instruction, quality teachers and staff—motivating students and keeping them engaged to a common goal to be successful on state exams and in life,” NHS principal Ken Purvis said. “I think it’s maintaining the level of expectations. We’ve been fortunate that we’ve earned A’s, and every year we’re still trying to climb the ladder within that A spectrum to get better every year.”

Hawthorne Middle/High School and Shell Elementary both received an F for the 13-14 school year, but improved to a D and C, respectively. As principal of both schools, Libby Hartwell said these grades are frustrating because if anyone were to spend time at either school, he or she would know that it is not an F school.

She said the protocols put into place at the schools to continue improving include teachers looking at individual student data and making decisions based on what is best for that particular student’s learning style.

That has made a big difference in tracking the data and assessing the best way students can learn, she said.

“We’re not quite there yet, but we’re seeing improvement in the number of kids passing the tests,” she said. “Granted, it’s not as fast as we would like it, but it’s progress nonetheless.”

ALACHUA – The qualifying period for the April 12 election to two Alachua City Commission seats will expire at 12 p.m., Friday, Feb. 26. Alachua's election qualifying period runs for one week, this year beginning on Tuesday, Feb. 12. Each seat is for a three-year term.

Qualifying packets have been picked up by both incumbents and several other people according to the Office of the Deputy City Clerk, but as of Monday, Feb. 22, no one had turned in their completed packet.

Anyone wishing to qualify before the end of the qualifying period may contact Alan Henderson or Melanie Westmoreland in the Office of the Deputy City Clerk at 386-418-6100 or in person at City Hall, located at 15100 NW 142 Terrace, Alachua.

ALACHUA – Incumbents for two City of Alachua commission seats are being challenged during the April 12 election.

Coerper, 69, is the first Alachua mayor elected by citizens and has held the position since 2010. He has served five previous terms as either city commissioner or mayor. He is active in the Alachua Chamber of Commerce and is a member of the North Central Florida Regional Planning Council.

Coerper said he is his harshest critic. “If I am not having fun and being effective, I wouldn't want to continue to serve,” he said. “But I am having fun and I believe I have been effective in serving the citizens of Alachua, so I am ready to continue.”

Robbins, 57, is challenging Coerper for the mayor's seat. She previously served as city commissioner from 2001 to 2004. She considers herself a citizen advocate and said, “I am running because I have witnessed the entire City commission neglecting its sworn duties to represent the public to which they are elected to serve. Many policies are neglected and ignored in exchange for meeting the needs of special interests.”

Wilford, 71, has served on the city commission for two terms and was vice mayor from 2012-2013. He served as the CEO of Central Florida Community Action Agency, retiring in 2014.

He is a city commission alternate to the Alachua League of Cities and the commission liaison to the Senior Resources Advisory Board and the North Central Florida Regional Planning Council. He is a U.S. Navy Vietnam-era Veteran who completed his 20-year career in 1983.

“I moved here in 2007 and started attending city commission meetings to see how the city functioned,” said Wilford. “After watching for a while, I thought I might have something to offer our citizens and decided to run for commissioner and won. As a commission, we have accomplished a lot, but still have more to do. Reducing utility costs while also insuring we have controlled growth while protecting the environment."

Challenging Wilford for Seat 2 is Lundy, 68. She was born and raised in Alachua and graduated from A.L. Mebane High School. Lundy graduated from St. Leo University with a degree in criminology. She taught elementary education in Duval County from 2002-2010 and holds a dual certification in Elementary Education and Exceptional Student Education. Currently, Lundy is a private reading tutor and public speaker, as well as an evangelistic preacher.

“I am a voice for the people who are not able to speak for themselves,” said Lundy. “Sometimes it helps to have someone interpret what is going on in government for people who may not be familiar with the details of how their government works."

The 2016 City of Alachua Election will be held on Tuesday, April 12. 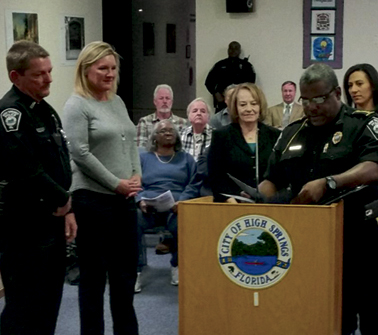 HIGH SPRINGS – Two teachers and a school nurse received an award at the High Springs city commission meeting last Thursday for saving the life of a child.

After continuous efforts, the foreign object was eventually expelled. The student began to slowly breathe on his own. Emergency personnel arrived on scene and treated and transported the youngsterto a local hospital. Emergency Medical Service personnel gave credit to the school staff for saving the life of the student.

A High Springs Police Department spokesman said afterwards that he has heard that the child is now chewing his food thoroughly before swallowing.