ALACHUA – Alachua native, Gator Hall of Famer and NFL Veteran Mike Peterson will host his annual Family Fun Day this Saturday from 5 – 8 p.m. at Skinner Field in Alachua. This free event, also presented by The Centers for Special Needs Trust, is open to all area residents and will feature family friendly activities such as face painting, kickball, music and dancing, bouncy houses and more. Dinner will also be provided.

While the entire event is completely free, guests are asked to bring at least one non-perishable food item.  Upon entering Skinner Field, guests can exchange their canned good(s) and receive a ticket that will enable them to get a free ice cream.  Immediately following the event, all donated food items will be donated to the Cleather Hathcock Community Center in Alachua to feed the hungry.

For the second consecutive year, Alachua Family Fun Day will have a “Get to Know Your Community” section, highlighting local businesses and their products and services.

A graduate of Santa Fe High School, Peterson created the Mike Peterson Foundation in 2004 as a means of giving back to his hometown of Alachua and his NFL hometowns of Jacksonville and Atlanta.  The foundation’s mission is to support families in need in the community and to stimulate the positive development of youth through education, recreation and life skills programs. To learn more about the foundation or its events, call 352-897-0673 or visit www.mikepetersonfoundation.com.

ARCHER– The length of the search process for city manager raised some concern at the city commission meeting Monday, June 11.

Residents and commissioners alike questioned when the application process will close and when the new city manager will be chosen.

Commissioner Blanch Parker was concerned about keeping the application process open until the position is filled.

“We had five people we interviewed, and even if we had 50 interviews after that, we don’t owe them anything to keep this open if we want one of those five,” Parker said. “I don’t think we’re getting a system that we all agree on [the application process].  It is just hanging there dangling.”

The city commission posted advertisements at the end of April stating it will continue accepting applications until the position is filled. Fourteen applications were submitted. Those candidates were narrowed down to five and given an hour interview with each commissioner.

“I was under the understanding that we were taking applications and then we would interview, and if there were qualified candidates then we had every right to hire,” Parker said. “But I’m getting the impression that we have commissioners or everybody but me that thinks we can keep on taking applications and putting off hiring somebody until we’re good and ready.”

Commissioner Gabe Green motioned to offer the job to Mayberry. There wasn’t a second for his motion.

Local resident Sarah McIntosh voiced her concern about what she felt was a delay in choosing a city manager.

“I agree that it needs to be something that we take care of efficiently and quickly because we need a city manager in place to see us through the things we’re going through, particularly the sewage system,” McIntosh said. “I don’t think it sends a good message about Archer.”

Commissioner Fletcher Hope said, “I’m slightly offended that we’re dragging it out, because we’re not.”

Hope said they’ve set the parameter to have someone chosen preferably by June, no later than July 1.

“I think it’s coming to closure. I think we need to follow the guidelines like we’ve done,” he said.

Mayor Frank Ogborn added, “We’re not slow about this process, it’s a tough decision. We’re moving through this.”

A special workshop will be held June 20 at 4 p.m. to discuss all seven candidates, including the five interviewed candidates and the two new applicants. 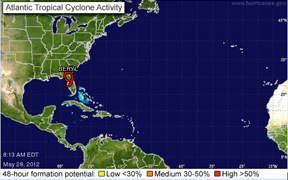 TALLAHASSEE – At 11 a.m. EDT, Beryl was downgraded to a tropical depression by the National Hurricane Center. The State Emergency Operations Center has returned to Level Three, regular monitoring.

Tropical Depression Beryl is located over northeast Florida and is expected to continue slowly moving west-northwest. The greatest threat with this system continues to be the threat for heavy rainfall. Residents and visitors should continue to take caution as flooding is possible.

TALLAHASSEE – At 11 a.m. EDT, Beryl was downgraded to a tropical depression by the National Hurricane Center. The State Emergency Operations Center has returned to Level Three, regular monitoring.

Tropical Depression Beryl is located over northeast Florida and is expected to continue slowly moving west-northwest. The greatest threat with this system continues to be the threat for heavy rainfall. Residents and visitors should continue to take caution as flooding is possible.

TALLAHASSEE – Tropical Storm Beryl made landfall at 12:10 a.m. EDT Monday morning near Jacksonville Beach with winds estimated at 70 mph. The State Emergency Response Team continues to operate at a Level Two, partial activation, to support the needs of the impacted counties in response to the storm.

“Northeast Florida and the eastern Big Bend will continue to experience the impacts from Tropical Storm Beryl through Memorial Day, including rain and potential flooding,” said Florida Division of Emergency Management Director Bryan W. Koon. “Residents and visitors should take precautions post-landfall and continue to heed instructions of their local emergency management agency.”

At 5 a.m. EDT Monday, Tropical Storm Beryl was located about 20 miles west of Jacksonville, Florida. Maximum sustained winds have decreased to 50 mph and Beryl is expected to become a depression late tonight. Tropical Storm Warnings are now in effect north of Flagler Beach and for the Florida counties of Nassau, Duval, St. Johns, Flagler, Columbia, Baker, Clay, Putnam, Bradford, Union, Madison, Lafayette, Inland Taylor and Inland Dixie. Beryl is moving toward the west at 8 mph, but should slow down today while turning west-northwest, and then turn north late tonight through early Tuesday. The greatest threat with this system continues to be the threat for heavy rainfall. 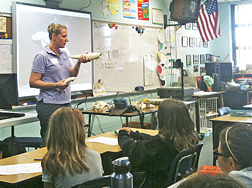 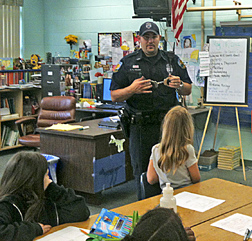 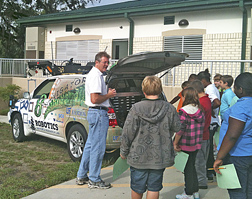 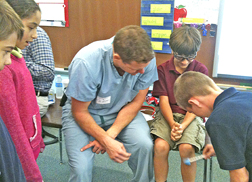 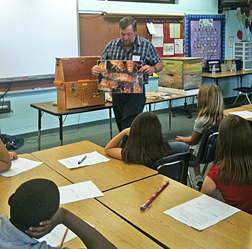 ALACHUA – Students at Alachua Elementary may have a better idea of career choices after the school recently conducted its annual career day. Youngsters received firsthand information about careers ranging from health care, to veterinary science to criminal justice to robotics and more.

Iske Larkin, an educational coordinator in Aquatic Animal Health at the University of Florida shared her special interest in manatees. She talked about manatee habitats, and showed students tracking devices that are used to learn about manatees. She also passed around ribs and jaws, which had been found in rivers.

University of Florida Police Department Officer Chad Holway talked to students about going through the police academy and showed them the equipment and gear he uses while on the job.

David Armstrong, who works at a University of Florida research lab, brought a robotic car encased in electronics and sensors, giving it the ability to drive itself. In response to a student’s questions about the value of the car, Armstrong said it cost about $1 million.

Shands physicians Dr. Mehta and Dr. Kelleher, talked to youngsters about what doctors do and how much education it takes to be a doctor. They let the students use the reflex hammer, see into other students’ ears and listen to heartbeats.

Alachua beekeeper Chappie McChesney shared information about bees.  Students were interested to learn that bees live only a few weeks, except for the queen.  He told the students that the oldest known queen is 8 years old. He also explained the duties of a beekeeper.

Submit your story by

Details
Administrator
The Buzz
23 May 2012

The Alachua County Sheriff's Office conducts driver’s license checkpoints to provide a visible deterrent for those who violate laws and reduce the safety of the motoring public. According to the ASO, drivers who do not possess a valid license or insurance have been identified as an area of traffic safety concern.

Motorists are also urged to routinely check their vehicle’s safety equipment to ensure compliance and reduce their chances of being involved in a crash. This check should include the following:

 Take a “walk around” your vehicle to allow you the opportunity to visually observe your tires. Routinely check your tire pressure with a quality tire pressure gauge.

 Check all of your fluid levels.

 If you have a child restraint seat in your vehicles, check it each time before use.

Drivers who enter the checkpoint are urged to slow down and follow the deputy’s instructions.