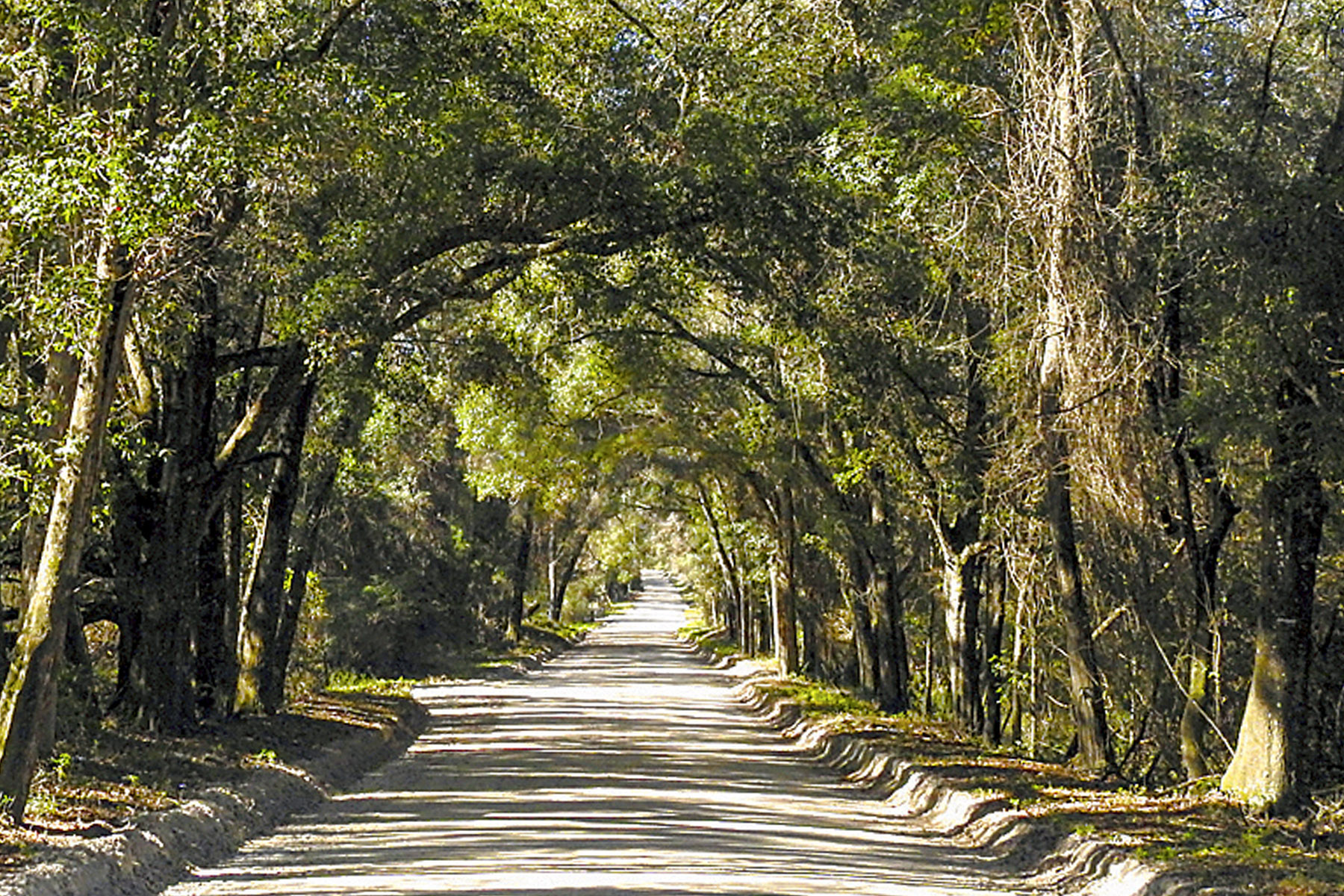 ALACHUA – The oldest existing road in America runs through Alachua County. While some of the road has disappeared due to development or abandonment, sections still exist as the Old Bellamy Road in Alachua. It is named after John Bellamy, the contractor and Florida plantation owner who built it in 1825 through 1826. But the history of the road goes back centuries earlier.

North Florida is intersected with several rivers, the Suwannee, Ichetucknee and Santa Fe rivers divide North Florida, making long distance land travel difficult. At O’leno State Park, the Santa Fe river suddenly goes underground for three miles before re-emerging at River Rise State Park. This natural bridge has provided a way of crossing the Santa Fe since prehistoric times. Since it allowed early travelers to walk across the river on dry land, many of the Indian trails in the region converged to a single pathway across the bridge.

When Spanish explorers and missionaries penetrated into the interior of Florida during the 1500s and 1600s, they too used the trail across the natural bridge. It became part of the historic old Mission Road, which linked St. Augustine on the Atlantic Coast with the numerous Spanish missions that existed around the present-day site of Tallahassee in the west panhandle area and the interior of North Florida. The route became known as “el Camino Real,” the Royal Road.

In the latter part of the 17th century, the Spanish tried, with limited success, to improve the Royal Road to allow use by ox carts, but it remained a simple dirt trail through the rugged interior of the state. The road saw heavy use throughout the mission period, but fell into disuse in 1702-1704 when English raiders led allied Indian warriors into Florida. The missions were destroyed and thousands of Apalachee, Timucua and other Indians were killed or carried away into slavery.

Despite British raids, Spain still owned Florida for another100 years. After the United States gained territory from the British in The Revolutionary War, large numbers of settlers arrived in Georgia, South Carolina, Mississippi and Alabama. Spanish Florida had a smaller Spanish population by this time and became a refuge for runaway slaves and Seminole Indian raiders, which the Spanish used for a defensive network. But Florida had become a burden to Spain, which could not afford to send settlers or troops, so the Spanish government decided in 1819 to cede the territory to the United States in exchange for settling the boundary dispute in Spanish Texas.

American settlers began establishing settlements and forts in North Florida. Travel and roads were limited in the interior, so in 1824 Congress authorized the creation of a road using the old Spanish Royal Road. They appropriated the money for the project and placed the work under the supervision of U.S. Army Captain Daniel Burch, the officer assigned to direct the project. Captain Burch surveyed the route, leaving Pensacola in October 1823. His unit traveled 445 miles and arrived in St. Augustine a month later. Burch saw the vastness of the project and difficulties of the terrain, so he decided to contract out the eastern half of the road from Tallahassee to St. Augustine.

On Dec. 18, 1824, Florida plantation owner John Bellamy entered a bid to build the section of the new road between the St. John’s River near St. Augustine and the Ochlockonee River near the new territorial capital of Tallahassee. He could complete the project, he believed, for $13,500. The bid was accepted and in early 1825 work began on laying out, clearing and building the road.

The congressional act had stated that the road was to be 25 feet wide to allow two wagons to pass each other, but the contract with Bellamy required that the road only be 16 feet wide. Tree stumps were to cut as close to the ground as possible, in order to clear a wagon’s axles. Travelers quickly complained that the road was not always wide enough to let two wagons pass, that the bridges were inadequate, and that some stumps, “stump knockers,” were too tall, jolting passengers and breaking axles. The road became known as Stump Knocker Road.

Bellamy used his plantation slaves and contract workers to clear the road, but cutting a dirt road through North Florida in the summer presented numerous challenges. Bellamy’s slaves worked through difficult conditions with heat and humidity, insects and the torrential afternoon rains that turned the sandy soil into mud. Although the western portion of the road had to use a ferry to cross the Aucilla River, the planned route in Central Florida took advantage of the three-mile stretch where the Santa Fe River disappeared underground, near present day O’Leno State Park.

By May 1826, “Bellamy’s Road” was completed and became the main route for travel between Tallahassee and Saint Augustine prior to the Civil War. By the 1860s, Florida’s population and settlements had grown and other routes, as well as train travel, began to make Bellamy Road less traveled, and by the 1890s it was no longer being used except by local residents. Over the next century it fell into disrepair and portions disappeared as nature reclaimed the land.

But portions of Old Bellamy Road still exist today, with much of it either running through rural residential neighborhoods or buried under newer asphalt roads. In eastern Alachua County, the road follows the Old Mission Trail on the south end of Lake Santa Fe and part of State Road 26 in Melrose. Another easily accessible remnant is part of the O’Leno State Park and the overland pass of the Santa Fe River. From there, the road passes out of Alachua County toward Tallahassee. For a trip through the early history of Florida, visitors can still drive a section of the original road as they make their way to the Bellamy Road Interpretive Trail at River Rise Preserve State Park just north of High Springs. Open daily, the trail follows the trace of the old road and includes panels detailing its history. To reach the trail, travel from High Springs on U.S 41/U.S. 441 North for 5.6 miles then turn right on Old Bellamy Road SE. Follow it to the end and the trail parking area will be on the left.

The road may now be a quiet tree lined street or walking trail, but its impact on Florida’s history was large even though it is unknown to most people. It is a centuries old trip through time.