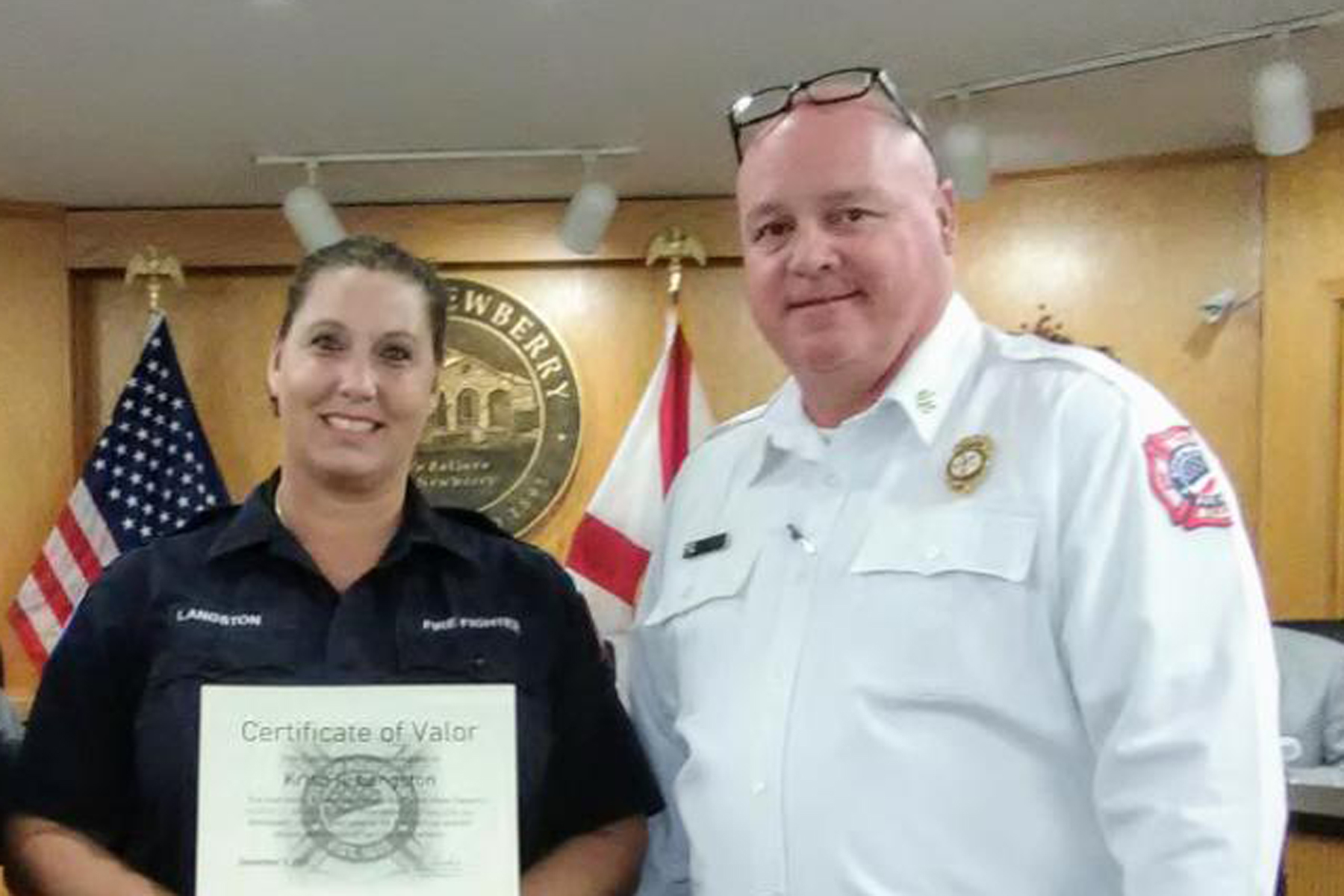 NEWBERRY — Newberry Fire Chief Ben Buckner addressed the Newberry City Commission and a packed audience on Dec. 9 to tell them that one of the City’s own fire fighters, Kristi Langston, was the recipient of a 2019 Sky Valor Award for her heroic work in the face of nearly insurmountable odds.

“On the afternoon of Jan. 3, firefighter Kristi Langston and Alachua County Fire Rescue (ACFR) Rescue Lieutenant Travis Chaney responded to a serious multi-vehicle accident on I-75. When they arrived, they found a horrific scene with multiple vehicles involved, including two semi-tractor trailers, with severe damage and several vehicles on fire. Additionally, patients were strewn over the large scene, with many having been ejected and now lying in the roadway,” he said.

The roadway was blocked by a fully-involved tractor-trailer fire, which had been ignited after approximately 50 gallons of diesel fuel spilled onto the highway. Rescue units coming from the north were cut off from the patients needing treatment. Many more fire trucks and ambulances were coming from the south, but those units were delayed due to the location of the accident and traffic flow.

Firefighter Langston and Chaney spent the next several minutes triaging and treating patients involved in this mass casualty situation. “The scene was chaotic, to say the least,” Buckner said. As additional units arrived, Langston and Chaney prioritized patients for immediate transport to the hospital, while large fires and explosions erupted in their immediate area. “Once sufficient responders arrived at the scene, Langston and her partner packaged a critical pediatric patient into their unit and transported the patient to the hospital as a trauma alert,” said Buckner.

Overall that day, three passenger vehicles and two tractor trailers were involved in the accident with 14 total patients. In the end, there were seven fatalities, including five children from Louisiana who were traveling to Walt Disney World in a church van with seven more passengers from the same church.

“With the severe stresses and emotion of that environment, firefighter Langston and Rescue Lieutenant Chaney remained calm and effective, helping to save the lives of many of the patients,” Buckner said.

Langston has served as a fire fighter with the City of Newberry since Oct. 1, 2005. Following Buckner’s description of Langston’s service to those in need in the aftermath of the crash, Mayor Marlowe mentioned that Kristi was part of a special training program.

Buckner explained that within the past week, “Kristi received notification that she passed her National Registry for Paramedic training, which involves a year-long commitment along with very intensive EMS medical training.”

The Sky Valor Awards for 2019 were presented on Oct. 7 at the College of Central Florida, Ocala.