School officials say year is off to a smooth start 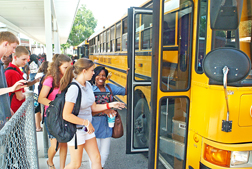 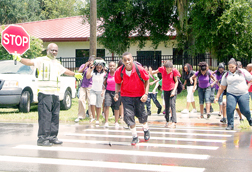 Students were back to the books, back to the busses and back to school Monday morning.  But Monday marked a first of many things, not just the first day of school.

Eva Copeland has checked off her first school day as the new principal at Alachua Elementary School, where roughly 425 students welcomed her.

Copeland was tapped to fill a vacancy left by retiring principal Jim Brandenburg.  After some 20 years as the school’s principal, Brandenburg decided over the summer he wanted to spend more time with his family and community organizations.

“It has been an extremely smooth start to the school year,” said Copeland.  “Students were quickly placed and it’s been great.”

Copeland is no stranger to Alachua Elementary.  She previously taught at the school for some 16 years.

“This has just felt so natural coming back home. The way things are done around here came back so quickly,” she said.

Down the road at High Springs Community School, Principal Jeff Means welcomed aboard two full-time teachers.  Ms. Jamie North, who previously taught at Ft. Clarke Middle School, and Ms. Heather Fultz, who was a part-time music teacher at Mebane Middle School, have both been hired at High Springs Community School.  The school also has a new part-time agriculture teacher.

With a combined total of some 840 middle and elementary-aged students, Means said the first three days have gone off without a hitch.

“We’ve had a terrific start to the school year,” he said, crediting a high level of participation at the school’s Meet the Teacher event Friday.

Students at Santa Fe High School walked into a newly constructed expansion on campus.  An excited Principal Bill Herschleb said the school officially opened the doors on eight new mathematics classrooms and two teacher planning rooms, all of which are part of a science building that opened on the campus last year.

The classrooms are equipped with the latest audio/visual technology.  Using a digital setup similar to a SMART Board, the classrooms have a system called Sympodium, which includes wireless slates that can be passed around the room, allowing students to interact with instruction media.  The rooms also have student response systems, allowing the teachers to gauge student comprehension of subject matter in real time.

The new addition also includes two computer labs, each of which are outfitted with 34 computers.

Along with the expansion of the science and mathematics building, the school is now an official WeatherBug reporting site, Herschleb said.

Complete with an anemometer for measuring wind speed and direction, a thermometer, barometer and a live camera, the system has been operational for just a few weeks, said Herschleb. Weather measurements and video from the site can be found by searching for the zip code 32615 on www.weatherbug.com.

Herschleb echoed the sentiments of Means and Copeland, saying the first few days have been smooth-running.

“We’ve had very few requests for schedule changes because we do a lot of personal contact with parents and students over the summer to ensure that schedules are indeed what students had requested,” he said.

Santa Fe High School has about 1,000 students on campus and another 100 or so who are dual-enrolled at Santa Fe College.