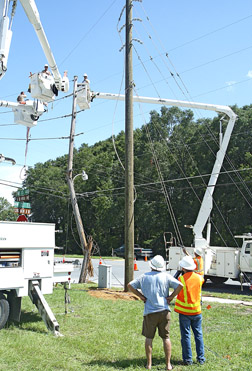 Utility workers were on the scene Friday to replace a damaged utility pole, which caused a power outage lasting more than nine hours.

A tractor trailer turning too sharply is apparently to blame for a snapped utility pole that left about 20 customers without power for much of the day Friday.

The driver of a 1999 Freightliner truck operating under Lee’s Trucking of Perry, Fla., reportedly struck a utility pole near the intersection of U.S. Highway 441 and NW 133rd Terrace, Alachua Police Department Spokesman Jesse Sandusky said.  Traffic in the northbound lane of U.S. Highway 441 was re-routed for more than four hours.

The interruption in service meant that hundreds of students at the elementary school reportedly had a general field day in lieu of regular classes.  The City’s downtown water treatment facility was also affected.

The replacement utility pole and necessary components came at a price tag of more than $1,500, New said.  Including labor, equipment and contractor costs, New estimates the grand total will reach $10,000.

The City of Alachua is closed on Fridays, but nine City employees were called in to help with replacing the damaged utility pole and restoring power.

“The replacement of the damaged utility pole was not a simple matter,” New wrote in an e-mail about the incident.  “Our staff executed the work flawlessly under less than ideal conditions. The damaged pole was connected to one of the City’s two major feeder circuits serving all of western Alachua including the downtown business district and the Interstate 75 commercial corridor.”

After being struck by the trailer, the broken utility pole was left dangling free from the ground.  It was held up only by the utility lines that ran it.  The force of those lines exerted such pressure that the pole broke in a secondary location at its upper end.  A remnant section of the utility pole was still attached Wednesday to the lines overhead.

No injuries resulting from the accident were reported.  Authorities report that charges are pending.