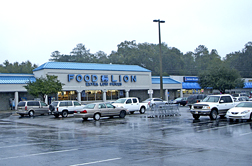 A good number of cars dotted the parking lot in front of Food Lion Wednesday afternoon as the soon-to-be-closed store offered discounts on its remaining inventory in stock.

ALACHUA – Lately, when Eli Prizament looks out the window of his “Then N Again” Consignment store around 6:30 p.m., he sees an empty parking lot.

Food Lion, the plaza’s anchor tenant, will be shutting its doors on Feb. 15. Current hours are 8 a.m. to 6 p.m. Slowly, the shelves are becoming bare, and customers are going elsewhere.

Across the street at Hitchcock’s, business looks booming, said Prizament.

“There’s nothing for them to come here for,” he said. “I don’t know what’s going to happen to this place, you know. It feels like it’s going to be a ghost town.”

Prizament purchased the location for his consignment store because of Food Lion.

“I get most of my business from Food Lion,” he said. “When they go, I might have to go too.”

Prizament remembers when Winn Dixie located near the Florida Highway Patrol Station on US Highway 441 in Gainesville closed. He said the whole plaza seems dead now. He fears, without Food Lion, the plaza could soon fall to the same fate.

After Lowe’s moved into an adjacent lot, the Food Lion plaza experienced a small resurgence of business. Recently, a Campus USA Credit Union was built in the same area.

However, most of the businesses sharing the plaza with Food Lion were unable to comment. It is uncertain how business will move forward for Sherwin- Williams, Family Dollar or Countryside Veterinarian Hospital.

An employee at the animal hospital said there had been no noticeable decline in business since Food Lion announced its closure, but that it was uncertain what the future may hold.

Other employees located in the area were willing to say that the parking lot had noticeably less traffic.

According to a press release, Delhaize America, Food Lion’s parent company, will be closing 126 stores in under a month. Headquartered in North Carolina, Delhaize America estimates around 4,900 employees will be displaced from their jobs.

Food Lion will be completely pulling out of Florida, shutting the doors of 25 underperforming stores. It is estimated that the Alachua Food Lion employees 35 to 40 people. A Food Lion store located in Lake City will become Harveys, a sister company to Food Lion. However, the Food Lion located at 2302 SE Hawthorne Road, Gainesville, Fla., will also be shutting its doors.

Food Lion employees were unable to comment about how the closing would affect their lives. Christy Phillips-Brown, spokesperson for Food Lion, said the employees were already going through a difficult time, and did not need to be bothered.

Currently, Food Lion leases the Alachua, Fla., property. However, Phillips-Brown said the company is reviewing its options on how to handle all its current leases, adding that at all locations, they would be willing to sub-lease to any interested tenant.

With the closing of Food Lion, Hitchcock’s becomes the only supermarket in a town with a population of 9,059, according to the U.S. Census Bureau.

Dennis Brucker, Senior Vice President of Hitchcocks, said the store would continue offering the products and services that it had been offering.

“And that’s how we’re going to move forward,” he said.

However, Brucker refused to comment about how Hitchcock’s business would be affected.

Food Lion customers seem upset about the supermarket closing its doors. Don Schuyler of High Springs said he shops at Food Lion once a week, if not more.

“Well, I don’t know where I’m going to go shopping now,” he said. He thinks he may drive into Gainesville for Sam’s Club, but feels the extra expense on gas and having to purchase a membership card is frustrating.

Food Lion, he said, provided a lot of discounts, and he estimated that he saved $50 a week on his groceries.

Prizament hopes that some good will come out of the closing, instead of the negativity. He opened his thrift store six months ago, but noticed a decline in business since Food Lion started cutting back its hours.

“I just don’t want to see myself putting up a going-out-of-business sign,” he said.