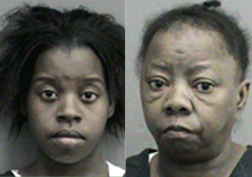 NEWBERRY – Two women have been charged in the December death of 5-year-old Javarian Wallace of Newberry.

Deputies responded to the family’s home at 616 NW 255th Drive in Newberry after receiving a 911 call around 7:30 p.m. on Dec. 27.  The family reported that Wallace wasn’t breathing and was unresponsive.

The boy was taken to North Florida Regional Medical Center where he was pronounced deceased.

According to reports, both women say they were the only caretakers for the boy on the day of his death.

Both the mother and aunt have been charged with first degree murder and a felony count of child neglect.

The boy’s mother, Valerie Owens, is being held on $100,000 bond according to the ACSO website.  Alice Owens is being held without bond.

ACSO officials say the investigation is still active and ongoing and ask anyone with information to call 352-955-1818 or CrimeStoppers at (352)372-STOP.