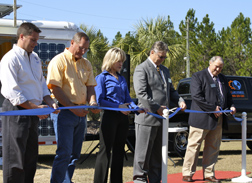 NEWBERRY – The sweltering Florida sun beat down on the roof of the Easton-Newberry Sports Complex Monday afternoon. Though the bright, hot sunshine might be cause of lament in the middle of January, on this day it was a source of celebration and hope for the City of Newberry.

The city hosted a “Green Celebration” to commission the solar photovoltaic system on the roof of the sports complex. The celebration included two public workshops about solar energy and a ribbon-cutting ceremony with Mayor Bill Conrad and City Manager Keith Ashby.

Conrad told attendants at the event that future plans for the complex involve turning it into a hurricane shelter. With more advancements, the solar energy the complex produces could be used in emergencies when power is out.

The mayor also noted that the system would save the city about $16,000 a year.

The solar photovoltaic system converts light energy from the sun to electricity.

According to Blaine Suggs, the city’s utility director, construction for the $51,347 system began in October of last year. It will provide about five percent of the electrical needs of the 19,000-square-foot building.

Wendy V. Kinser, the city’s planner and grant coordinator, said the system should pay for itself in about three and a half years. The 42 solar modules will produce about 15,000 kilowatts of energy a year.

The system was funded by a grant from the Energy Efficiency and Conservation Block Grant Program, a federal program founded in 2007 to reduce energy use and fossil fuel emissions.

Newberry was one of four cities out of 34 applicants to receive the grant.

“I was just thrilled that the City of Newberry got a grant,” Teresa Vickers, a 31-year-old Newberry resident said.

This excitement about solar energy is exactly what Kinser hopes to encourage in other environmentally friendly projects.

Kinser said she is trying to find ways to spark interest in solar energy with other citizens in Newberry. Part of this outreach program involves teaching local students about the benefits of solar energy.

Residents can also see first-hand what the system is doing on monitors in the lobby of the Easton-Newberry Sports Complex and at the City of Newberry City Hall.

At approximately 12:34 p.m., shortly after the ribbon was cut, the monitor at the complex showed that the system avoided 1,438.86 kilograms of carbon dioxide.

Solar Source, the contractor for the system, also provided two full scholarships to the City of Newberry to train local residents in solar panel installation and maintenance.

The Largo-based contractor has built solar systems as large as soccer fields and is one of the largest solar contractors in the state, according to Solar Source Vice President Rick Gilbert.

The company also facilitated two public workshops during the day to educate attendants about the benefits of solar power.

“There’s a lot of energy out there, we just gotta figure out how to use it,” Solar Source presenter Jeremiah Rohr said.