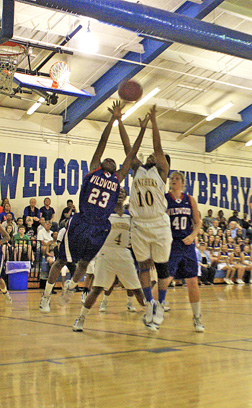 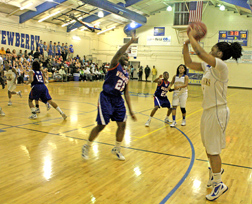 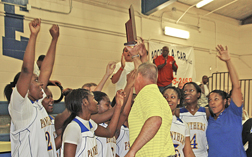 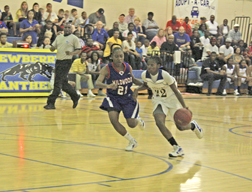 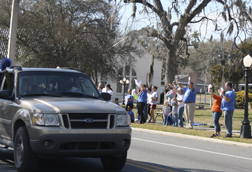 NEWBERRY – The small town of Newberry has only one stoplight, but the size of the town doesn’t characterize the extraordinary success of Newberry High School’s girls basketball team.

The team won their regional finals and state semifinals in their Class 1A. They pulled up just short of bringing home the state championship Wednesday morning with a loss of 52-54 to Ponce de Leon High School. Though they didn’t win the state championship, their journey became a focus in the school and community.

Newberry managed to close out the game with a score of 49-40. Newberry High School player Jasmine Walker said the key to their team’s success is really their defense.

Dawntavia Davis, who scored 16 points in Saturday’s regional final game, said that part of the team’s strategy in the state semifinals and finals has to do with a state of mind.

“We have to go in with a positive head,” Davis said.

After the team’s win on Saturday night, they moved on to the next Class 1A State Semifinals at The Lakeland Center. At 3 p.m. Newberry residents lined the street to wish the Panthers good luck. Some had signs, others were dressed up in the school’s colors, but all had hope that the team would represent Newberry well in the state championship.

The Newberry Panthers were ranked No. 3 in their class this season. Coach Ray Parrish has been at Newberry High School for four years, and the success the girls had this season was four years in the making, he said.

“This isn’t something that just happened overnight,” Parrish said.

In the first round of the state championship, the Newberry Panthers defeated Hillard Red Flashes with a score of 49-45. Lasharrah Nattiel and Tayla McGee brought in over 75 percent of the points that game, with 19 and 18 points each, respectively.

On Wednesday morning, the team played in the state finals against the Ponce de Leon Pirates. The team lost 52-55.

Scoring 28 points in the first half gave Ponce de Leon a halftime lead of 19 points.

In the second half, the Panthers began to gain ground, scoring 43 points in the second half. When there were only 2 minutes left in the fourth quarter, Newberry managed to narrow the gap to 6 points. Only seconds later, Nattiel stole the ball and scored another two points to make the score 50-54.

With 33 seconds left on the clock, Newberry scored another two points, but unfortunately, the second half momentum was not enough to bring home the state championship.  The final score was 55-52, with Ponce de Leon wnning the game.

Nattiel was the team leader in the game with 19 points, 15 rebounds and 2 assists.