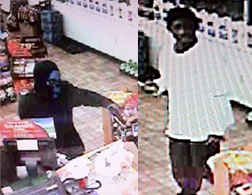 Police are looking for a masked robber (left) and another man (right) belived to be connected to a robbery at gunpoint Feb. 25.

The robbery reportedly happened around 10 p.m. on Saturday, Feb. 25, just steps away from Irby Elementary School.  That’s when, Alachua Police Department (APD) detectives say, a black man entered the convenience store, pointed a black semi-automatic pistol at the store clerk and demanded cash from the register.

The clerk was not harmed during the robbery, but an undetermined amount of cash was taken.

The man was described as wearing a black hoodie style sweatshirt, dark colored jeans, and a black ski mask with a blue skull printed on the face, APD Detective Jesse Sandusky said.

Police believe the man may have left the scene in a white minivan with another person.  That minivan was reported to have driven north on NW 140th street.

A second man, who may have served as a distraction, is also wanted for questioning in relation to the incident.  Police have released still images from surveillance video of both men.

Sandusky is requesting anyone with information to contact his office at 386-462-1396 or remain anonymous by calling the Crimestoppers hotline at 352-372-STOP.