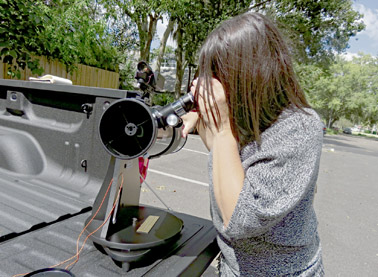 The Alachua Astronomy Club donated a modified Orion StarBlast 4.5-inch Dobsonian reflector telescope to the Newberry Branch, Alachua County Library District. It can be checked out by any current library card holder, 18 years or older with photo identification, for a period of four weeks at a time.

As opposed to some telescopes which magnify tiny cells and objects on slides, this telescope opens up the world of outer space. Weighing in at 13 pounds, it is portable and has quality optics.

Beginner observers are able to see the craters of the moon with the telescope, Jupiter, and even Saturn and its seven rings.

“Most of the donations we receive are books,” said Newberry Library Branch Manager Marlin Day. “This was a special kind of donation.”

“I was approached with the idea of the club applying for a telescope grant about two years ago by one of the club members,” Day said. “They didn’t get it last year; but this year, they did and I think it’s a really cool gift.”

“The Orion StarBlast telescope can detect stars down to magnitude 12, which is 250 times fainter than the faintest star the unaided eye can see,” Howell said.

Already, two people have checked out the telescope. One was a high school student, and most recently, a mother and teacher, Korina Zamora. “I saw the telescope sitting in the library,” said Zamora. When she realized it was available for check out, she had library staff assist her in packing it up into her truck. She said she intends to use it with her 6-year-old child.

“We live on five acres right near Watermelon Lake,” Zamora said. “With those big open skies I’m sure we’ll be able to get some use out of it.”

Zamora also shared her plans to use it for the full four-week period.

“Astronomy night at the University of Florida is Nov. 4,” she said. “I’m sure the people there will be like, ‘where did you get such a nice telescope?’ and I can tell them the Newberry Library!”