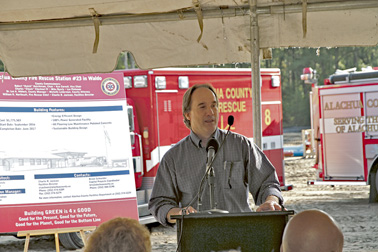 WALDO – Waldo just broke ground Friday, Nov. 4, on a new fire station, which is being built in their city by Alachua County. The station will be one of the newest fire stations in the county, and will be known as Alachua County Fire Station number 23. Completion date is scheduled for June 2017.

Alachua County and the City of Waldo celebrated commencement of the project with a groundbreaking ceremony last Friday morning.

The 5,684 square foot single story facility will feature energy-efficient equipment and sustainable design building features. The concrete masonry facility will also have a 100 percent back-up generator. Cost to build the new building is estimated to be just over $2 million

“The new station is being made possible in part by the donation of the late J.D. Griffis,” said Waldo City Manager Kim Worley.

“The City had some property owned by the late J.D. Griffis,” she said. “He donated the land needed to the City of Waldo, we in turn donated the property to the County for the new station with a clause that it had to be started within ‘x’ amount of years or it would revert back to the City and then to the Griffis family.”

The fire station will service areas ranging from Waldo to Orange Heights to northwest of the Gainesville drag strip, according to Waldo Mayor Louie Davis.

“We’re excited about it,” he said. “It’s on [U.S.] Highway 301 so it’s very visible. It’s going to be a nice facility, and we hope its location will encourage more development in that area.”