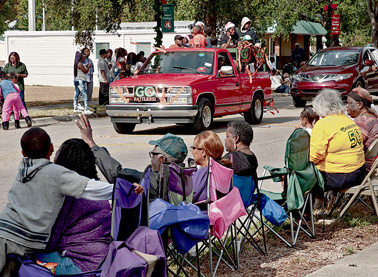 Spectators watch the Annual A.L. Mebane Alumni Parade held on Main Street in Alachua.  The parade is just one of a number of events taking place over the three-day period that celebrates and remembers the school whose last high school graduating class was in 1971. (Today photo/RAY CARSON)

ALACHUA – For the past 21 years, the student alumni of A.L. Mebane High School have celebrated their unity, pride and history in a three-day Homecoming event on Thanksgiving weekend in Alachua. Various classes from 1960 to 1971 participate as members of the Mebane Alumni Association.

The Association has over 120 members who help keep the legacy of the school alive and provide cultural enrichment and social services to the community. Some of the services they provide are a fish fry for senior citizens, a back-to-school lunch program for students at Mebane Middle School and volunteering at Alachua schools as mentors to the students. They also provide annual scholarships to promising students at Mebane Middle School.

The three-day event started on Friday Nov. 25, with a Green and Gold Dance at the High Springs Civic Center and continued through Sunday with various activities open to the community as well as alumni. Fashion vendors set up at Mebane Middle School and ceremonies recognized the Grand Marshall and Homecoming Queens. Alumni classes competed for highest attendance and in basketball games .Other activities included variety and magic shows. There were also tours of the Mebane Museum at Mebane Middle School, which was established by the Alumni Association. The museum houses information and artifacts form the various African American schools in the area as well as artifacts donated by the Alumni Association. The three day event is an opportunity for all the students who graduated in the 16 years that Mebane High School existed to celebrate their memories and achievements.

For the Alumni Association, keeping their history alive is a matter of community pride. Mebane has a long history that saw changes in education for African Americans and the results of the struggle for racial equality and civil rights. In 1924, the Alachua County Training School (ACT) was opened to provide education for African American children. In this time of racial segregation, blacks and whites had to go to separate schools and few opportunities had existed for African American children. In 1956 the school was replaced by the Mebane School, named after Albert Leonidas Mebane who had been principle at the ACT school. The school covered all grades including high school.

This was still in the time of segregation so the school remained an all black school, but offered the same educational opportunities as other schools. The first graduating class was in 1957. In 1970, Alachua County schools were integrated by Federal law. Public schools in the county were reorganized and Mebane became a middle school. There would be no more graduating seniors. But the unity and spirit of the 14 graduating classes remained strong and the Alumni Association was created. In 1996 the Association held their first Homecoming event.

Throughout the following years, the event grew and became a cultural celebration for the whole community. The most popular part of the weekend is the Saturday parade down Main Street. Each alumni class designs a float, along with community organizations and churches. The parade is led by an escort of police cars and motorcycles, sirens wailing and lights flashing. The sidewalks on downtown Main Street are filled with spectators as cars carrying homecoming queens were interspersed with floats by the various alumni classes. Floats by the classes of 1963, 65, 66, 68, 69 and 71 rolled by as alumni members of each class threw out candy for the children attending the parade.

Once the alumni floats went by, other groups in the parade moved through. A marching band named “352” provided music while uniformed members of the Eastside High School NJROTC gave candy to the kids. Other groups that participated in the parade included The Female Protective Society, Saint Matthews Church, Outreach Ministry, Alachua Senior Cha Chas and the High Rock Riders motorcycle group. The parade closed with a group on horseback including two men portraying Florida's early cowboys, who had earned the name of Florida Cracker Cowboys by using the snap sound of a long whip to round up cows.

After the parade the community went back to Mebane Middle School for more festivities. Through the efforts of the Alumni Association and its annual Homecoming event, the legacy and accomplishments of the 14 years is kept alive each year.