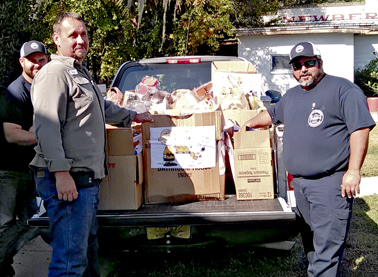 NEWBERRY – Results of a canned food drive campaign undertaken by the City of Newberry staff were announced during the Nov. 28 commission meeting. City Manager Mike New challenged all departments to participate and established a city-wide goal of 1,000 lbs. of food.

The food drive was conducted for the first three weeks in November with a weighing in held on Thursday, Nov. 17.

The city topped the goal by collecting a total of 1,136 lbs. of food, all of which was delivered to Blessed Hope to be used locally.

The team bringing in the most food was the Newberry Fire Department, which brought in 261 lbs.