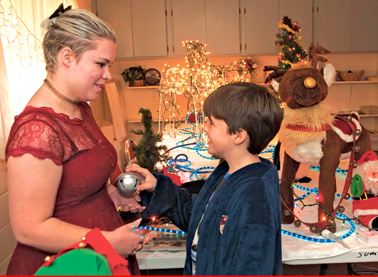 HIGH SPRINGS – High Springs was known as a railroad town in its early history, with a large rail yard and numerous trains passing through. That is all gone now, and even the tracks have been torn up, leaving only the old train station as a reminder of the city's heyday as a rail town.

However, for the Christmas season, there will be a special imaginary train coming to town. The story of the Polar Express will be performed in a short play by a cast consisting of local children. On Saturday Dec. 10 and Dec. 17 a group called ETV2 will sponsor an adaptation of the Polar Express story at the Summit Baptist Church in High Springs. ETV2, which stands for Entertainment Though Vision and Volunteer, hosts various entertainment events for the benefit of the community throughout the year.

In the past, ETV2 have organized events for Armed Forces Day, a Star Wars tribute and various charity events including bake sales to help raise money for Cancer research and individuals' medical expenses. The volunteer organization was originally called the High Springs Youth Group, but some of the people that wanted to participate were adults, so the name was changed to reflect the diversity. Much of the activities are done by children, both from individual families and some members of the Witness of Christ Ministry youth group. ETV2 offers kids a chance to participate in activities that benefit the community.

This is the second year the group has performed the Polar Express story. The event is free to the public and includes hot chocolate and cookies for visitors to the show. Donations are accepted to help cover expenses, but are not mandatory. “Things like the Polar Express give us a chance to give back to the community and do something good for the children and public, especially during the holidays” said Bob Watson of ETV2.

The public is greeted at the door by a narrator who tells the beginning of the story. A young boy, played by Aidan, is awakened Christmas Eve to the sound of a train whistle outside his house. Surprised to find a train where there are no tracks, the conductor explains the train is called the Polar Express and is headed to Santa's village at the North Pole. As the boy boards the train, he sees other children all in their robes who have also boarded the magical train.

On arriving at the North Pole, the children and conductor go down the church hallway to a room representing Santa's workshop. Entering the room they are greeted by five other children dressed as elves and Mrs. Claus, since Santa is busy preparing for his ride. Mrs. Claus gives the boy a present of one of the reindeer's sleigh bells, and they board the train to go home.

After leaving the train, the boy realizes the bell has slipped through a hole in his pocket and he is heartbroken to lose such a special gift. The next morning there is an extra present under the tree from Santa, which contains the bell. He is surprised to learn that his parents can't hear the bell, and as time goes by he realizes that only those that truly believe in Santa Claus can hear it. As the years pass even other children lose the ability to hear it, but the boy keeps his belief and can always hear the prized gift.

As the play ends, the public is offered a chance to meet a special guest, and Santa Claus sits in a room to greet all the children and listen to their Christmas wish list. The play, which runs about 15 minutes, is open from 1 p.m. to 4 p.m. on Saturday both Saturdays. Summit Baptist Church is located at 210 N.E. Santa Fe Blvd., High Springs.