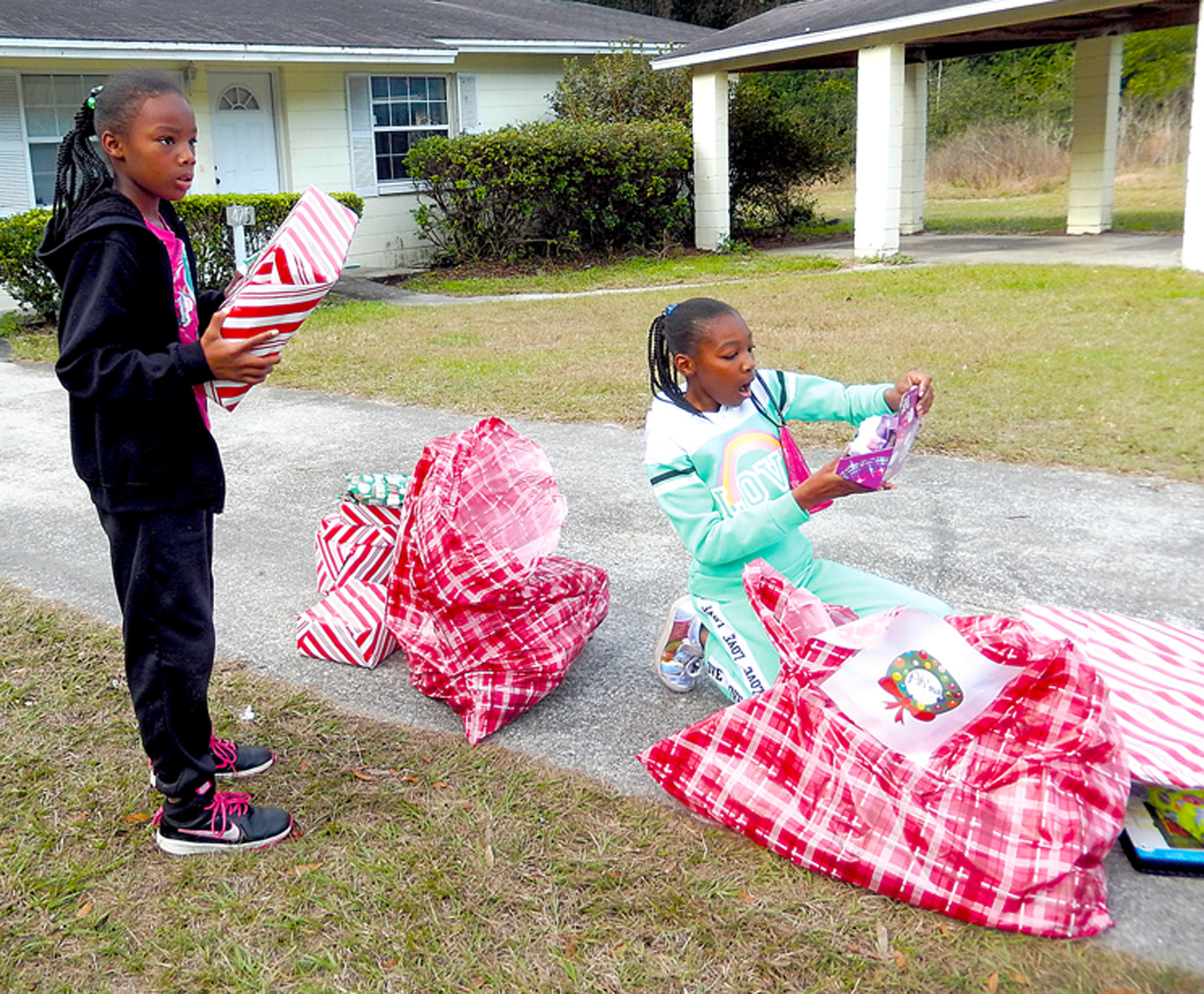 High Springs Police cruisers with lights flashing and a High Springs Recreation Department truck towing a trailer laden with gifts wove through town as the gift-bearing visitors waved and called “Merry Christmas” to everyone they passed as they traveled to each home.

Children still in their pajamas, a few of whom were still groggy from sleep, received deliveries of large bags of presents. Children tore open colorfully-wrapped gifts as fast as they could to find clothes, shoes, stuffed unicorns, a hoverboard, skateboards, bicycles, hot wheels and more. Police officers helped keep things tidy as they gathered shredded wrapping paper, which the kids had strewn around their yards as they tore into their gift bags.

In addition to the participation of the police officers and City personnel, Police Chief Antoine Sheppard’s son, Noah, and Officer Treese’s son, Camden, also rode along to help.

This event was months in the making by Angela Robertson, Administrative Assistant to Police Chief Antoine Sheppard. Robertson communicated with parents and business owners in the area to make sure the appropriate gift items would be provided to each child. In one case, her quick thinking saved the day as a cousin of the children she had provided gifts for showed up unexpectedly. “We just couldn’t give a gift to the others without including the extra child as well,” she said. She grabbed a gift in the trailer and gave it to that child to make sure he wouldn’t feel left out.

She is reluctant to take credit for her efforts preferring instead to talk about the church group who helped wrap each of the gifts and the employees who donated the gift, which they had received from the City (a turkey or ham,) to help out families with limited food resources.

In addition to gifts for the children, each family received an envelope from the City that contained gift cards from Walmart and Winn Dixie and another for a pizza night out from Hungry Howie’s Pizza.

One of the officers involved in the gift distribution was High Springs Community School Resource Officer J.T. Taylor, who likely was the person who helped determine which families were most in need this Christmas. All of the children and parents were familiar with him and with Chief Sheppard. Although some of the other officers were less familiar to the children, each child thanked them one by one for the gifts, and in many cases, the officers were rewarded with hugs as part of the children’s appreciation.

Quietly, and in the privacy of his vehicle, Officer Taylor talked with Robertson saying that he had observed that a sibling of one of the children who had received a significant gift item did not have one of their own, either. Although Robertson thought there might be $20 left in the gift fund, Taylor said he would buy one more item for that child out of his own money and would return later in the day to deliver it.

Although Taylor may not have wanted others to know of his observation and decision, it is symbolic of who he is and how much he cares about the children he sees at school every day.

Other officers and staff at the High Springs Police Department involved in the gift giveaway were Suzy Mowery, Officer Williams and Sgt. Hampton.