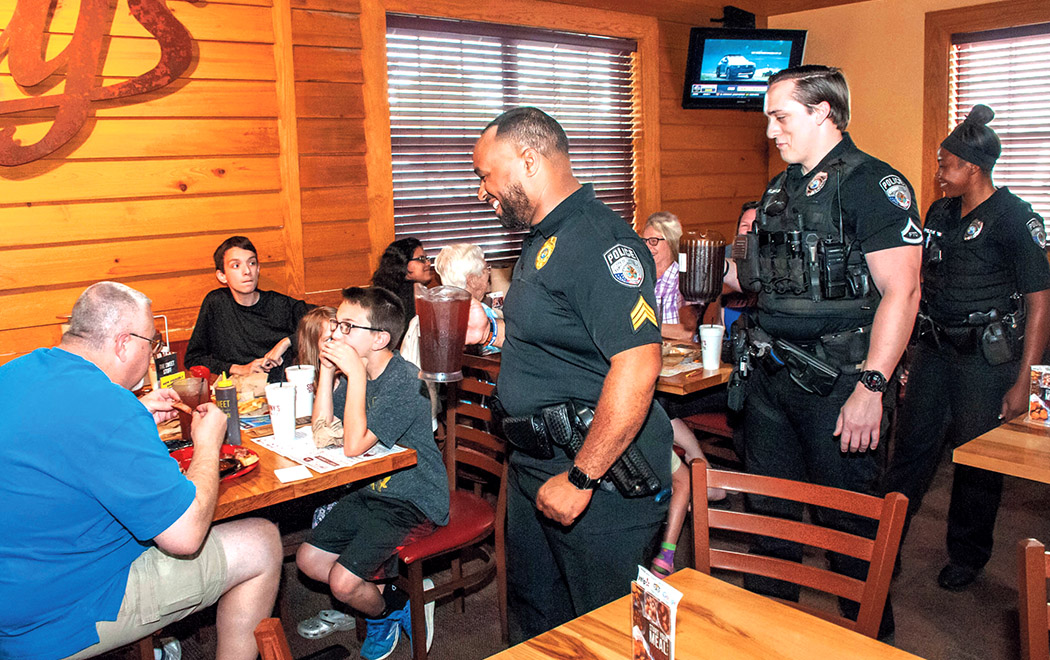 ALACHUA ‒ On a busy Friday night on April 29, customers at Sonny's in Alachua were greeted by some unusual waiters. Four police officers from the Alachua Police Department (APD) volunteered their time as “Celebrity Waiters” to collect tips at Sonny's restaurant to support the Special Olympics program.

Officers Thomas Stanfield, B. Railey, T. Brown and Sgt. C. Hunt joined the regular wait staff to serve beverages and interact with the customers to raise money for Special Olympics Florida in an event known as “Tip a Cop.”

Accompanied by three athletes from the Special Olympics, Jason Cacciotti, Richard Sullivan, and Gabby Taylor, the officers went from table to table introducing people to the athletes, explaining the significance of the program and collecting donations to help fund the athletes’ training and events.

The Special Olympics was the vision of Eunice Kennedy Shriver, a member of the Kennedy family that included Rosemary, who had an intellectual disability. The mission of Special Olympics is to provide year-round sports training and competition in a variety of Olympic-type sports for people with intellectual disabilities who wish to participate, giving them continuing opportunities to develop physical fitness and gain confidence in themselves.

Neither athletes nor parents are charged a fee to participate in the program, and activities exist for those of all ability levels, from the highly functioning to the severely challenged.

The programs are funded by donations and organized by volunteers. Each state has its own Special Olympics organizations with all funding raised staying within the state. Special Olympics Florida serves over 60,000 athletes and offers training and competition in a variety of team and individual sports, with the help of over 38,000 coaches and volunteers statewide. However, besides state events, there are national and international competitions as well.

The “Tip a Cop” event is an official Law Enforcement Torch Run Campaign fundraising event that is organized throughout the country with law enforcement officers and department personnel volunteering their time as “Celebrity Waiters” to collect tips at a restaurant in support of Special Olympics.

In Alachua, Sonny’s Restaurant offered to sponsor the event and the restaurant was at full capacity for most of the evening. Many of the customers were there especially for the event, but there were more than a few surprised patrons who did not expect to be served by police officers in full gear and uniform during their dining night out.