ALACHUA ‒ The City of Alachua has been awarded the Florida League of Cities (FLC) Hometown Health Award that recognizes health members that meet the nine best practice standards for employee health promotion.

The FLC is government sector lobbying association and is a member of the National League of Cities (NLC), which is a advocacy organization that represents the country's 19,495 cities, towns, and villages along with 49 state municipal leagues. In Florida there are 411 participating municipalities. The FLC lobbies on both a state legislature and federal congressional level for programs and education that help cities improve their local government and living conditions of the towns’ residents.

The FLC recognition included "the City of Alachua has not only achieved great participation in Hometown Health, but has also demonstrated a true commitment to employee well-being. Employers play such a vital role in creating a workplace that supports a healthy environment and health conscious culture.”

FLC Health Account Executive Lindsey Larson presented the award to the City Commission at the Sept. 14, 2020 Commission meeting. She noted the City's accomplishments in safety training in all areas of city operations, special reviews and training by outside consultants, health screening and the City's support by contributing 50 percent toward health club memberships for employees.

The City maintains a variety of wellness incentive programs throughout the year. Most recently, a step challenge to encourage more active behaviors, was completed with great success. Participants electronically recorded walking step numbers for five straight weeks. The total number of steps recorded was a staggering 8,281,168, which is the equivalent of 3,845 miles. This is just one example of the programs administered by the City that promote a healthy and safe workforce. The award specifically recognized the efforts of the Compliance and Risk Management Department under the direction of Grafton (Cap) Wilson. Larson also cited the efforts of Compliance and Risk Management Coordinator Anne Marie DiRocco, Human Resource Manager Donna Meyers, and Lisa Freeman from the Human Resources Department and Robert Purdy, Safety Specialist for the City.

In other business, the Commission turned their attention to financial matters and infrastructure. During the month of August 2020, the city manager presented the City Commission with the proposed FY 2020-21 budget by major fund types. The tentative budgets presented, at that time, totaled $40,644,612, which is $12,049,821 less than the FY 2019-20 amended budget of $52,694,433. The General Fund tentative budget is based on a tax rate of 5.3900 mills. This tentative millage rate is 4.83 percent more than the rolled-back rate of 5.1416 mills.

A final public hearing on these matters will be held at the Sept. 28, 2020 Commission meeting at 6 p.m. in Alachua City Hall, James A. Lewis Commission Chambers. The public is invited to add input at the meeting.

The Commission approved a bid for the City’s Roadway Improvements Project. On Aug. 5, 2020, the City solicited formal bids from qualified vendors to furnish all necessary equipment, supervision, labor, materials and incidentals to complete the City of Alachua FY 2020 Roadway Improvements Project. The City received seven bids. V.E. Whitehurst & Sons, Inc. was the lowest bidder with a Base Bid of $137,445 and an Alternate 1 bid of $61,755, for a total of $199,200. The Commission approved the bid with the stipulation that it cannot exceed $250,000.

To speak with a counselor or join in one of the classes: call 1-800-963-5337; visit www.floridashine.org for class dates and times; email shine@agingresources.org to receive your invitation to register.

Elder Options is a non-profit agency that administers funds from the Florida Department of Elder Affairs for senior services in a 16-county area (Alachua, Bradford, Citrus, Columbia, Dixie, Gilchrist, Hamilton, Hernando, Lafayette, Lake, Levy, Marion, Putnam, Sumter, Suwannee and Union counties). Elder Options, mandated by the Federal Older Americans Act, exists to promote the independence, dignity, health, and well-being of elder citizens; to plan, fund and administer a coordinated continuum of services; and to advocate for the needs of older Americans.

NEWBERRY ‒ The City of Newberry is contracting with Perry Roofing Contractors for $26,500 to replace the Newberry Fire Station bay roof. The decision was made during the Sept. 14 Commission meeting. Commissioners also authorized the city manager to approve change orders not to exceed 15 percent of the contract amount.

“The bay roof replacement project was programmed in the City’s Capital Improvement budget for replacement due to the condition of the existing flat roof and leaks in the roofing system,” said Director of Utilities and Public Works Jamie Jones during his overview of the project.

Jones contacted Perry Roofing and was provided additional pricing for tearing off the existing roof system and insulation down to the steel deck in lieu of recovery for an additional $5,000 over their original $20,000 price. Installation of 100 linear feet of TPO walkway protection pads for $1,500 was also discussed.

“Based on discussions with the contractor and the City Building Department, both of these options were recommended to be included in Perry Construction’s scope of work,” said Jones and all were approved.

NEWBERRY ‒ The City of Newberry conducted a public hearing to set a tentative rate of taxation on real and personal property and to determine the annual ad valorem taxes for the City for the 2020-21 fiscal year.

Newberry had conducted five budget workshops to discuss the budgets. Although time was allowed for public comment, no comments were offered by the public during this hearing.

The tentative millage rate of 5.9999 was announced by Director of Finance and Administration Dallas Lee along with a roll back rate of 5.8930. Lee said the percentage change of millage from the roll back rate is a 1.81 percent increase.

City Manager Mike New said there was a $15,000 surplus available. He suggested that Commissioners could choose to save the surplus funds, put the money toward capital improvements or put the funds toward increased merit funds for employees, which would likely increase budgeted merit increases from 2.5 percent to 3.5 percent.

Following discussion, it was unanimously decided to direct the funds toward merit increases and allow the city manager to determine how those funds would be fairly expended.

The tentative millage rate was unanimously approved. A final hearing is scheduled for Sept. 28 at 7 p.m.

HIGH SPRINGS ‒ Heavy rains may be contributing to people and pets recently falling into sinkholes in the High Springs area. High Springs Fire Department (HSFD) Public Information Officer Kevin Mangan reported that just before 2 a.m. on Sunday, Sept. 13, three local fire departments and a police department were dispatched to a wooded area off of Poe Springs Road to help rescue a couple trapped in a sinkhole.

HSFD, High Springs Police Department (HSPD), Alachua County Fire Rescue (ACFR) and Newberry Fire Rescue (NFR) were involved in the rescue attempt of the couple who had driven their ATV into a water-filled 40-foot deep sinkhole. Upon arrival, HSFD crews found the two victims trapped in the sinkhole.

“The couple was riding their ATV through the dark woods when their vehicle struck a sloped area on the ground, plummeting them into the sinkhole,” said Mangan. “The victims had to swim to the surface to await rescue,” he said. Luckily, another couple was with the two individuals and reportedly they were the ones who called 911 for assistance.

A single rescuer repelled down the sinkhole and removed each person one at a time using specialized technical rescue tools. The couple suffered only minor injuries and were not transported for further medical attention.

According to reports, the sinkhole is located in the wooded area roughly across from the industrial park, about a half of a mile off of the road.

In another incident that occurred at 6:35 a.m., Monday, Sept. 14, High Springs and Alachua County Firefighters were dispatched to 22210 N.W. 188th Street to rescue a dog reportedly stuck in another sinkhole. Upon arrival, HSFD Engine 29 crew found a dog trapped in a sinkhole roughly 40 feet deep. According to reports, the sink had been a stable depression on the property for the last several days before finally giving way.

Authorities report that “A methodical preparation process led to ACFR Lt. Brian Ferguson, using an extension ladder and rope system, to descend into the sinkhole to rescue the dog. Once at the bottom, Lt. Ferguson found a frightened, but thankful pup. The dog was successfully removed from the sinkhole uninjured.”

This is the second technical rescue in a sinkhole in as many days in High Springs. While sinks are common in this area, both fire departments warn that the extended periods of rain seen recently may cause further sinkholes to open or deepen.

NEWBERRY ‒ The Newberry City Commission has tentatively approved an increase in electric utility service rates. Commissioners conducted a legislative public hearing on first reading of an ordinance to amend and revise sections of the City’s Code of Ordinances.

During the five budget workshops held by Newberry, rate changes were proposed to modify electric rate charges. The changes were authorized by Commissioners at that time and were presented and approved during the Sept. 14 public hearing.

Director of Finance and Administration Dallas Lee presented Ordinance No. 2020-24 and reminded the Commissioners that the City establishes electric rates to generate revenue that will meet its operating expenses. Each year staff members evaluate utility rates at budget time to determine whether they need adjusting.

“Staff proposes an increase in its water and wastewater rates to ensure the funds operate in a self-sustaining manner,” Lee said.

“Residential electric rates were adjusted by 1.00 percent on the customer charge, for an average residential impact of $1 per month. Non-residential rates are proposed to be adjusted in a similar fashion,” said Lee.

Lee pointed out that even after the proposed rate changes the City will still offer competitive rates when compared to other utilities.

A second and final reading of the proposed increases will take place at the Sept. 28 Commission meeting. 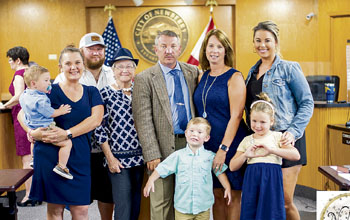 NEWBERRY - Newberry’s newest City Commissioner Mark Clark and his family pose for pictures following the Aug. 25 Swearing in Ceremony. The ceremony was held during Newberry’s Special City Commission meeting. Clark replaces Commissioner Rocky McKinley who stepped in earlier this year to replace Commissioner Matt Hersom, who relocated out of the area. In addition to Clark, Group One and Group Three incumbents Rick Coleman and Monty Farnsworth kept their seats and were also sworn in at the same meeting.