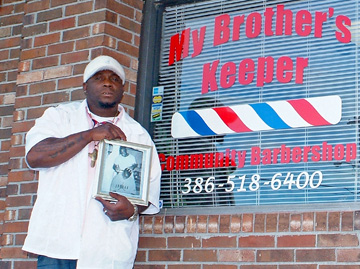 After years away from Alachua, Romey Ford has come home to his roots.  Shown holding an old photograph of himself and his deceased brother, Ford operates My Brother’s Keeper Barbershop, embracing his reclaimed community and keeping the memory of his brother alive.

Romey Ford gave his first haircut at the age of 10. His client was his oldest brother, Tiwon Ford.

He traces the beginning of his shop back to a visit by the Gainesville Sun when he was 14.

The newspaper was going around, finding out what local high school kids were doing for the summer. They had heard he was making a lot of money, cutting hair behind his mother’s house.

When they came to take his picture, he was cutting his younger brother Sharkei’s hair.

Five years ago, Sharkei was killed in a car crash on State Road 441.

The brothers had been driving in separate cars to a big family meal their mother was cooking for Romey’s temporary homecoming. Romey had just come home from serving in the military as a medic.

“I trained for eight years,” he said. “When this happened to my brother, I froze. It’s real then.”

He was the first responder, there to watch his brother die.

A year later, he received a medical discharge from the military due to back problems. Ford returned to Orlando, where he had been living with his wife and six children, cutting hair in an addition built on the side of his house.

He said he could not shake the feeling that his brother was with him.

“Whenever I would catch the time, it would be 4:41 or 1:44, reminders of 441, where he died,” Ford recalled. “I was still leaving Orlando to sit at Sharkei’s grave for six or seven hours once a month a year later.”

Then, someone brought him the picture from the Sun taken so many years earlier; he had not seen it since 1992.

That was when he knew it was time to return to Alachua and start a barbershop.

He spent three years looking for a location, trying to talk himself out of it when he got discouraged. However, he had his faith to give him strength.

“I am a religious man,” Ford said. “I didn’t borrow money or save any money to start. I was looking for favor.”

Finally, he found the perfect location. The intersection of 441 and NW County Road 235, where My Brother’s Keeper Barbershop is located, sees 21,000 cars pass through daily, according to Ford.

More importantly, it is right near where Sharkei was killed.

Ford started the business with only a $500 Lowe’s card and a vision.

“Write the vision, and make it plain on tablets, that he may run who reads it,” he quotes from Habakkuk, a book in the Old Testament.  “For the vision is yet for an appointed time; but at the end it will speak, and it will not lie.”

With this in mind, the first thing Ford did was paint the walls red. “My Brother’s Keeper” is also written in red on the front window.

To him the color is sacrificial, representing the loss of his brother.

“I am my brother’s keeper, and I’ve always been,” he said. He has no interest in further explaining the name of the shop.

Embracing and investing in his community is his guiding purpose.

Growing up poor in a huge family, he left Alachua at 18 to pursue an academic scholarship at the University of Florida, never intending to return. He said he felt like he was too good for his home, better than everyone there.

His first year in school, he had a child. Within a year and a half, he was gone, off to join the military.

Now that he has made a place in Alachua again, it is important to him to help the people that make up his community.

“I serve God by serving others,” he said. “If I can spark one person, then My Brother’s Keeper has done its job.”

He started off by planning to have two barbers. Since opening, he has allowed the break room to turn into a store and his storage room to be used by a cosmetologist.

Before he could even move into his office space, it was painted purple and taken over by two braiders, both single mothers. His office is now a single black filing cabinet in the main room.

“One year ago I was unemployed,” Ford said. “Now I employ nine people.”

He attributes this accomplishment to his faith, determination and will to not give up on his vision.

“After all, you can’t just make up another vision,” he said. “I left Alachua for 15 years, because I had to figure it out.”