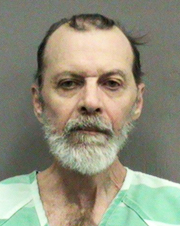 HIGH SPRINGS – A High Springs man was arrested early Tuesday morning for allegedly threatening his neighbor with a shotgun and then firing a round into his own couch.

According to an Alachua County Sheriff’s Office (ACSO) report, Ronnie M. Hammond, 59, of High Springs was arrested after repeatedly pumping a shotgun and threatening a neighbor.

Deputies say a 24-year-old sleepwalking neighbor walked up to Hammond’s home asking for help just after midnight Tuesday morning.  Another neighbor, who allegedly witnessed the incident, said Hammond walked out of his residence carrying a shotgun.

The neighbor claims that Hammond then pumped the shotgun and pointed it at the sleepwalking neighbor and said he was going to kill him.

The 58-year-old father of the man who was sleepwalking reportedly approached Hammond stating that his son was sleepwalking and was not trying to do anything except ask for help.  According to the report, Hammond then turned the gun on the father and said he was going to kill him as well.  After making that statement, Hammond allegedly pumped the shotgun two more times.

The father and son both ran away from the area, the report states.  The neighbor witnessing the incident said Hammond continued walking up and down his property, pumping the shotgun until law enforcement officers arrived, at which point, he went back into his residence.

Deputies report that they made numerous announcements for Hammond to surrender himself.  “At one point, he exited the residence and pumped the shotgun again,” the report states.

Hammond only surrendered himself after first returning to the residence and discharging one shotgun round into his couch, according to the police report.

The shotgun was located with four rounds still in the chamber, deputies said.

After being arrested, Hammond reportedly said someone kidnapped his son and told him they were coming for him too, but deputies said Hammond doesn’t have a son in the immediate area.

Hammond was charged with two counts of aggravated assault with a deadly weapon.  He was taken to the ACSO Department of the Jail.  He was released Tuesday following a first appearance and posting a $10,000 bond.