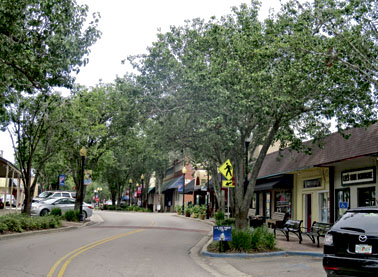 A view of Alachua's iconic winding Main Street that will soon change as new landscapaing, including replacemenet of diseased trees, will refresh the area.

ALACHUA – Main Street in Alachua will look a bit different by September.

The City of Alachua’s Downtown Redevelopment Trust Board (DRTB) met June 29 to present the details of a projected $70,000 renovation of the landscaping along the town’s historic street.

The project will also include reworking of irrigation systems and the addition of new plants, flowers and shrubs in plant beds drafted by a professional landscaper.

Sidewalks will be pressure cleaned, and The Hitchcock Theater Park will be landscaped. New street striping will also be applied.

Existing, free-standing newspaper stands will be replaced with a uniform black box with cubbies for various papers.

The Bradford Pear trees are scheduled to be replaced because they have lived beyond their expected natural life, and replacement trees will be placed in locations that allow for better traffic view of businesses, entrances and signs.

The report comes as a result of efforts made by City of Alachua staff approximately two years ago, when the City contracted with landscape architects Buford Davis & Associates to perform an analysis of the condition of the landscaping along Main Street and make recommendations.

A neighborhood meeting was held on June 14, 2016 with current owners and tenants along the corridor to share the proposed project and receive input.

Construction activities are slated to conclude in September.