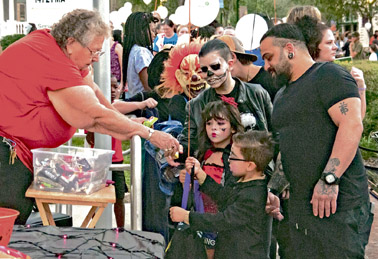 Left: Dot Evans of the Alachua Chamber of Commerce helps distribute treats during the Trick or Treat on Main Street event on Oct. 31. The event is hosted by the Chamber, co-sponsored by the City of Alachua and supported by local merchants who give away candy. (Today photo/RAY CARSON)

ALACHUA – Halloween is an ancient tradition. In modern times it’s a celebration, a time to creatively dress up as witches, goblins, superheroes or any other alter ego. Adults celebrate with parities and children get to go trick or treating in costume asking for candy. It is a time of fantasy and imagination. But its roots go far back in history, a combination of the celebration of fall and a time to honor the departed.

In Alachua on Halloween and the days leading up to it, there were several celebrations filling the downtown Main Street area with spooks, witches, superheroes, demons and a myriad of other costumes.

On Thursday, Oct. 28, Tony and Al's restaurant in downtown Alachua held a special event featuring music and art based around the Halloween tradition. Seven artists were present at the event featuring photography, stained glass and drawings as well as jewelry, wooden masks and carvings. Mark Miale was the featured musical performer accompanied by Rickylee Brawner and Jon Rhoads. Member of the audience dressed in costume and prizes were given for best couple and best costume with Best costume going to Lynda Short who was dressed as a nun.

But the main Halloween event was Alachua’s annual Trick or Treat on Main Street on Halloween night as thousands of young – and old – ghosts, goblins and superheroes took to the downtown area. The event is hosted by the Alachua Chamber of Commerce and co-sponsored by the City of Alachua. The celebration has been going on for 14 years and continues to attract large crowds each year.

Although Halloween in America has a long tradition of children in costumes going house to house, times have changed, and many parents are concerned for children’s safety walking through neighborhoods in the dark. The Chamber founded the event to create a safe place for children and families to walk around and collect candy that is safety checked. They also wanted to maintain a spirit of community within the town by bringing the event to Main Street.

Local businesses on Main Street, city offices and corporate sponsors set up stations to give out candy to the children. All the candy is purchased by the individual businesses. Some of the corporate sponsors included Publix and Waste Pro. The city of Alachua Public Service division and Police department also provided candy stations. Several church groups also participated, including First Baptist Church of Alachua and River of Life church. Christ Central Church also handed out balloons to children.

In addition to the candy stations, other activities included a costume contest for children and prizes for the winners of the Scarecrow on Main Street contest. First prize went to Doctor Douglas Adel, second prize was awarded to Mebane Middle School Student Government sponsored by Waste Pro and the third prize went to Alachua Boy Scout Troop 88.

The event was a success with one of the largest crowds they have had and plenty of happy kids. As Alachua Mayor Gib Coerper stood watching the crowd with satisfaction, he said, “The event only lasts a couple of hours , but you walk the whole length of Main Street and see everyone having fun. They all go home with smiles on their faces and you can't ask for any better than that.”