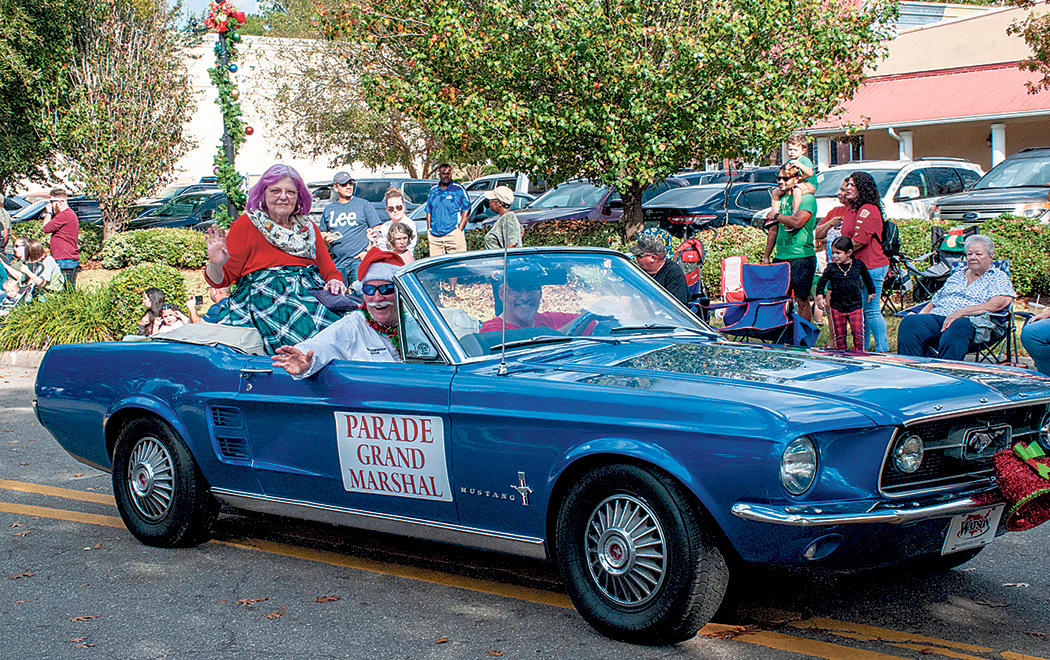 ALACHUA ‒ Christmas in Alachua is in full swing this holiday season. For the past 37 years the Alachua Chamber of Commerce has hosted the annual Christmas Parade on downtown Main Street. Each year local businesses, the City of Alachua, civic groups and churches sponsor floats to entertain spectators and compete for prizes.

This past Saturday, children anxiously awaited the parade for a chance to see Santa Claus and collect sweet treats tossed from decorated floats or handed out by people walking alongside.

Due to COVID, last year many activities were canceled. High Springs opted to cancel their annual parade in 2020 but the City of Alachua moved forward with the community tradition. Last year’s event was smaller than previous years, both in crowd size and in number of floats and entries. Instead of the usual 35-40 floats, there were only 28. But the festivities, enthusiasm and spirit of Christmas celebration were still evident, despite the changes brought on by the virus.

This year, the tradition continued, and both the community and the Chamber were ready to bring back the event better than before. The weather was clear and mild with 40 floats participating to a packed crowd that lined all the way along Main Street, with many of the crowd wearing festive Christmas themed clothes and accessories. The City of Alachua and Chamber have been working hand in hand to celebrate the entire month, creating weekly Fa La La Fridays, in addition to the parade and tree lighting.

The parade always starts with a police escort. With lights flashing and sirens wailing motorcycle patrolmen lead the parade, followed by police cars from Alachua and High Springs. The parade's Grand Marshal, Emelie Matthews who is the building manager for the Alachua Woman's Club, along with Alachua Mayor Gib Coerper, greeted the crowd from a vintage convertible Mustang car. The State Champion Santa Fe High School Ladies Raiders Volleyball team was next in line, as the crowd applauded them and members of the team handed candy to the children lining the curb. Following them was a color guard of three Marine veterans. Other members of the Marine Corps League of veterans followed in a World War II army jeep.

The 4-H Club also had horses and riders decorated for Christmas. Decorated motorcycles weaved in and out on the street as did the ever-present Shriners Club riding a variety of vehicles. Another group that always enters the parade in a large and colorful float is the Hare Krishna who chant for peace as they walk down the street. Each float paused at the judging booth vying for awards.

While everyone enjoyed the floats and festive mood, the part of the parade the children had been waiting for finally arrived. At the tail end of the parade, Santa Claus and Mrs. Claus waved to the children as they by rode by on top of a fire truck. Children responded, waving and calling out Santa's name to try and catch his attention. While the children were excited to see Santa at the parade, they all will be dreaming of another visit from Santa…on Christmas eve.