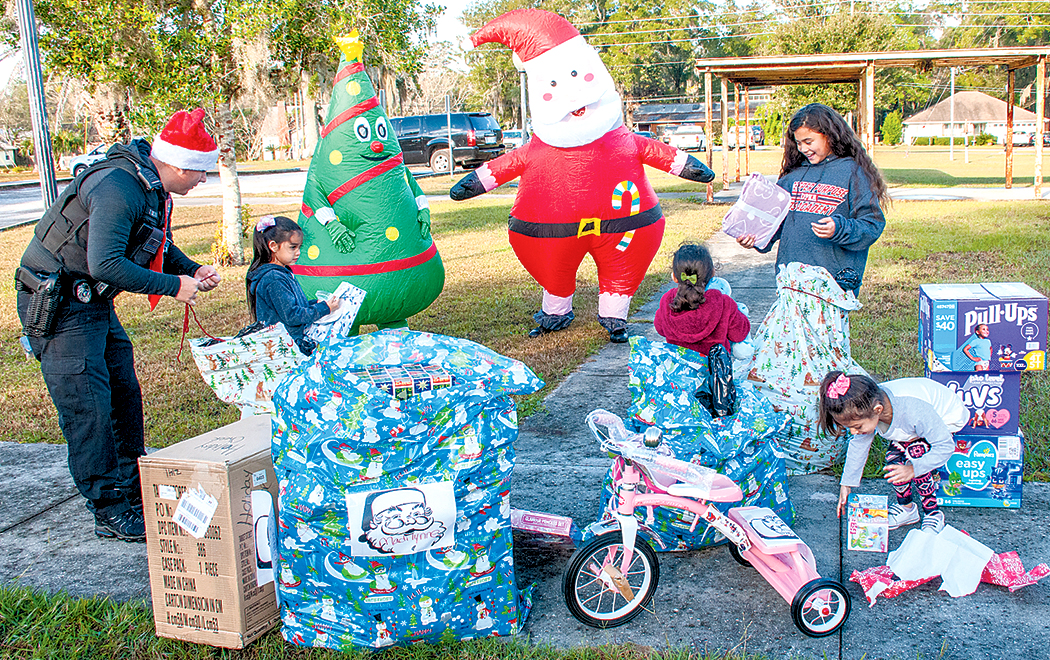 HIGH SPRINGS ‒ For 13 years in late December the High Springs Police and Fire Departments have been making wishes come true for local children. This year, on Dec. 22, a convoy of police cars, city vehicles and a firetruck with lights flashing and sirens wailing, traveled through High Springs neighborhoods delivering “Operation Holiday Cheer” to excited children.

Each year, beginning in the fall, the High Springs Police Department (HSPD) and Fire Department (HSFD) ask for donations of new toys, clothes and books from the community, as well as gift cards and cash, to give to families in need. Working in conjunction with the City CRA, Parks and Recreation Department and Public Works, they set up collection points within local businesses and city sites to gather donations from individuals in the community, civic groups and businesses, both local and national chains.

Through collaboration between the HSPD and the High Springs Community School, families are identified to take part in the holiday tradition. With parental approval, a home visit is planned so that officers can discover what the children want and to find out if there are other children in the house to add to the list so that no youngster is left out. This year’s Operation Holiday Cheer brought smiles to 19 families with a combined total of 45 kids.

The past two years throughout the pandemic have been harder than usual for many families, especially economically, making fulfilling Christmas wishes tough. Due to these hard financial times, this year the HSPD made sure parents and children received gift cards donated by both local and corporate merchants so they could buy any needed items, including food.

“We raised over $10,000 in funds to buy gifts that matched the children's needs and wishes,” said HSPD Chief Antione Sheppard. “Individuals, businesses and civic groups contributed over $8,000 in purchased gifts, gift cards, money and merchandise vouchers.”

“Each family also received a food gift card of $400-$500 from contributing stores,” said Sheppard. “The pandemic didn't slow down charity, it seems to have made people even more aware of the hardships others faced and the need to contribute.”

After all the donations were collected, the police set Dec. 22 for delivery of Operation Holiday Cheer. Since they couldn't go to every house, they offered parents the choice to come to the station to pick up the gift bags to put under their own tree. With six locations remaining for delivery, police officers, firefighters and city employees gathered at the station at 9:30 a.m. to lead the caravan. Led by a High Springs Public Works pickup with a trailer full of presents, the convoy began its mission.

The first stop was a rural house where three children were anxiously awaiting their arrival and the children were stunned by the number of gifts they were receiving, matched to the list the parents had provided, and much more. Two police officers wore inflatable costumes as Santa and a Christmas tree. The other officers decorated their uniforms or wore Christmas hats to brighten the festive holiday.

At the second location a mother waited with her pre-teen son and two-year-old daughter. Although the little girl was confused and apprehensive at first, her uneasiness quickly turned to smiles of joy as the bags were opened. At the next stop, the costumed Santa was greeted with hugs from the youngest two of the four children. As the officers left, the mother hugged one of the police staff, thanking them for this special day.

The next stop had three teens and a baby. One of their wishes had been bikes, and they looked on in awe as two bikes were pulled off the trailer. As the caravan was about to move on to its final destination, the three teens asked to take a picture with Santa.

At the final stop, two neighboring families received gifts. One family included two young teen boys and a much younger baby brother. When the officers gave them their bags of presents, the youngest brother was confused and not sure what to do. One of his older brothers sat with him and helped the little one open all his presents before looking in his own bag.

For the High Springs first responders, the event is a tradition—an opportunity to help others in need and spread the joy of Christmas and community. For the youngsters who were visited, it is a Christmas they will never forget.