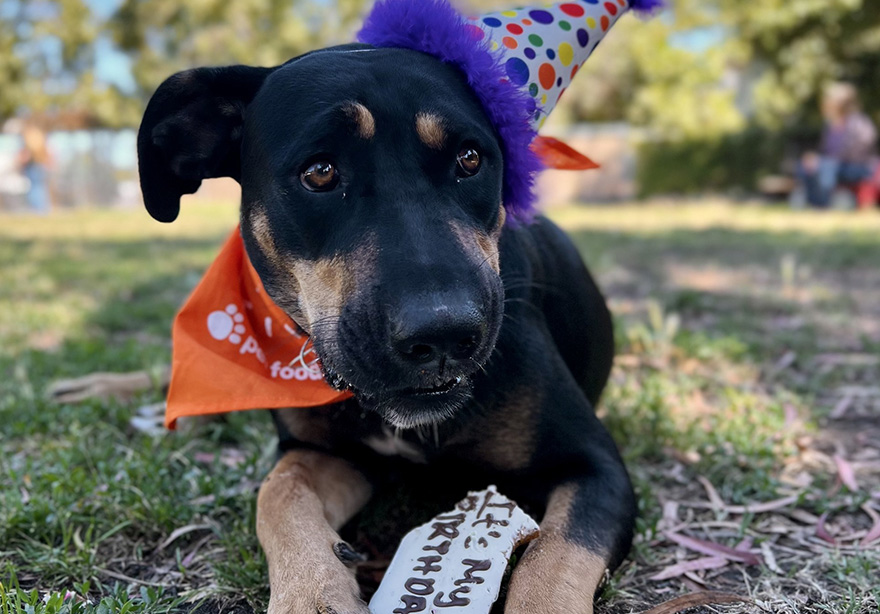 A puppy kissing booth, adoptable pets, BluLine Q, Lulu’s Gelato, and a kids craft station are just a few of the fun activities you’ll find at the Humane Society of North Florida’s first ever in-house event brought to you by Parks of Gainesville.

The event seeks to find forever homes for puppies, dogs, cats and kittens at the Humane Society’s North Campus shelter as spring ramps up and kitten season begins. The event will feature pets in the shelter and from foster homes. All pets are spayed or neutered, microchipped, and up to date on vaccinations.

“We are thrilled to open the doors to the community with this fun event that features something for everyone. This event is extra special as it allows the public to see each important program that we provide in-person in our shelter building,” says Executive Director, Chelsea Bower.

“Our staff and volunteers are excited to welcome the community to this one of a kind event and share their love of the animals and hopefully make some paw-fect matches!” said Joshua Sexton, Director of Volunteer Programs. The event will take place at Humane Society of North Central Florida at 4205 N.W. 6th Street from 11 a.m. to 3 p.m. on Feb. 11. Adoptable dogs will be available for a reduced adoption fee of $14 with the exception of puppies under 5 months of age. Check out all the available pets at HumaneSocietyNCFL.org/Adopt!

GAINESVILLE, Fla. - Below are the updated City of Gainesville traffic impacts scheduled for February 3-10, 2023.

SW Ninth Terrace: Southwest Ninth Terrace will be closed between Southwest First Avenue and University Avenue due to the construction of a new development. Construction is expected to last through August 2023.

High Springs Police Chief J. Antoine Sheppard has been selected to be the new District #17 Director for the Florida Police Chiefs Association (FPCA). District #17 encompasses six counties including Alachua, Bradford, Gilchrist, Levy, Marion and Putnam. District Director is the liaison between FPCA and other police chiefs.

Sheppard has been a member of the Florida Police Chief Association for several years. “As a result, I have briefly met many of Florida's top leaders, such as U.S. Senator Rick Scott and Governor Ron DeSantis,” said Sheppard.

Explaining his new appointment Sheppard said, “My leadership role is geared toward advocating for law enforcement and the public by influencing legislation and policies in Tallahassee. Although my new role will slightly increase my workload, my heart and mind remain in High Springs, where my primary job is protecting and serving our citizens.”

The previous District #17 Director was Santa Fe College Police Chief Ed Book, who relinquished his role after being elected as City Commissioner to the City of Gainesville Commission.

The Florida Police Chiefs Association is the third largest state police chiefs’ association in the United States and is composed of more than 1,000 of the state’s top law enforcement executives and members.

GAINESVILLE ‒ Joshua Emmanuel Hall, 36, Micanopy, has been charged with the December murder of Corey Grimmage in Micanopy. Hall, who was already in custody from a Dec. 20 arrest for narcotics and firearm possession, is now being charged with second-degree murder.

Alachua County Sheriff’s Deputies responded on Dec. 7, 2022, to a call about a body found in the roadway on Northeast 6th Avenue, a rural road in Micanopy. The body of 37-year-old Grimmage was found with four gunshot wounds to his mouth, left hand, right shoulder and right arm. Deputies determined that the body had been there for more than 24 hours. Six 9mm spent shell casings were found nearby, along with a 9mm magazine for a Taurus pistol and a Ruger LCP .380 pistol. No phone, wallet or money was found.

A witness reported seeing a dark Dodge Avenger around the streets of Micanopy and hearing gunshots the night of Dec. 3. Detectives also found that a complaint had been received on Dec. 6 from a woman who had loaned her black Avenger to Grimmage on Dec. 1. He was supposed to return it on Dec. 4, but it had not been returned and she said she began to worry.

Detectives found the Avenger at Arbor Apartments on Dec. 7 and reportedly found a substance believed to be blood on the exterior of the car. Several 9mm bullets were reportedly found between the windshield and the hood, in the wiper blade area. A cell phone was also seen in plain view inside the car. The car was impounded and towed, and a search warrant was obtained.

Detectives obtained cell phone location data for the phone that showed it moved from Northwest 13th Street in Gainesville to Micanopy on the night of Dec. 3 and hit a cell phone tower about 700 meters from where Grimmage’s body was found at about 10 p.m. the same night. The phone then moved north again to Gainesville, ending where it was later found in the Avenger.

Messages on the phone, which were found to belong to Grimmage, showed a conversation with “JBanz Banz” on social media; that account was found to belong to Hall. The conversation indicated that Hall and Grimmage were involved in the purchase and sale of narcotics. That evidence led to the Dec. 20 arrest of Hall for felony criminal conspiracy, trafficking in narcotics, using a two-way communications device to facilitate a felony, possession of a firearm by a convicted felon, trafficking in synthetic narcotics, possession of drug paraphernalia and possession of a firearm while in the commission of a felony.

Fingerprints from the Avenger and from Grimmage’s phone were identified as belonging to Hall. Detectives also obtained a search warrant for Hall’s phone, and its location data reportedly showed that Hall had traveled the same route as Grimmage’s phone on Dec. 3.

Another witness told detectives that Hall had come to their house sometime near the beginning of December late at night, “stressed” and “out of breath.” They said Hall said some type of “situation” had occurred. That witness described Hall as being homeless and not having a lot of money, but they said he had a lot of cash that night. The witness said that Hall sells “molly” and “weed” and that he had been asking where he could get a gun.

On Dec. 18 detectives received a report from the Florida Department of Law Enforcement that matched the shell casings found at the scene of the murder to the Taurus pistol that was reportedly in Hall’s possession when he was arrested on Dec. 20.

Based on the investigation, Hall has been charged with second-degree murder (dangerous or depraved without premeditation).

Hall has 14 felony convictions and has served four state prison terms, with his most recent release in November 2020. Before the December arrest, his most recent previous arrest was in October 2021 for domestic battery and damaging a TV; he was on probation at the time. After pleading nolo contendere to the charges, he was sentenced to 228 days in jail with credit for 228 days served. 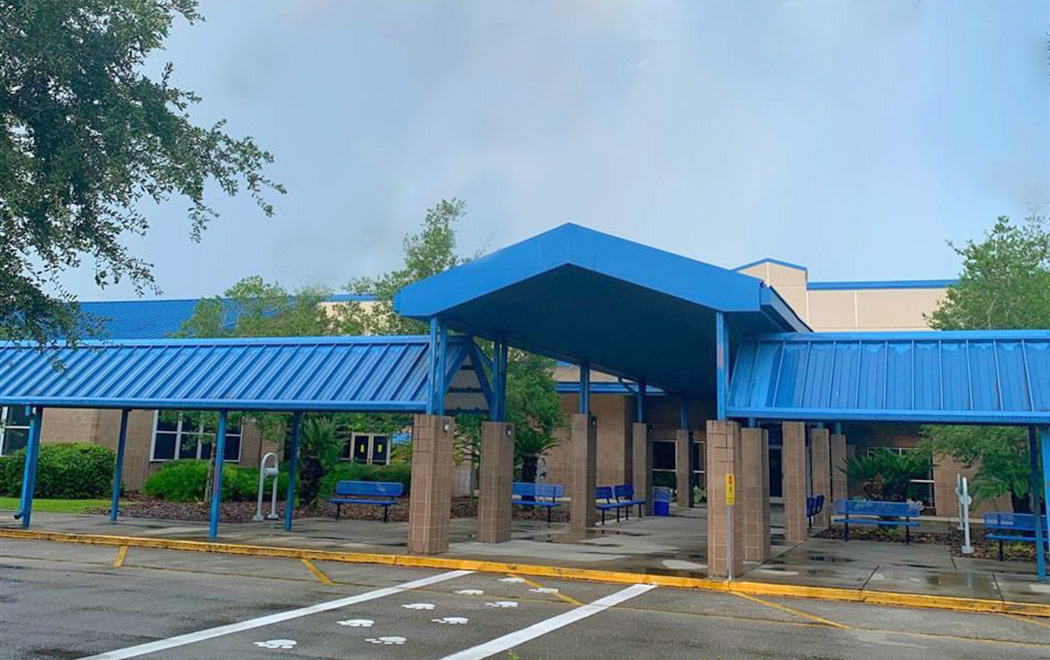 NEWBERRY ‒ Five 13-year-olds have been charged with misdemeanor battery following a fight after school on Wednesday, Jan. 18.

According to Alachua County Sheriff’s Office, Oak View Middle School’s School Resource Deputy (SRD) received word of a potential fight involving multiple students and followed a large group at about 4 p.m. as they went to a nearby business.

He encouraged one of the subjects to go home. As the student turned toward home, the deputy returned to the school to get his patrol car so he could continue to follow the group.

A fight developed off-campus and involved five 13-year-old suspects attacking a 14-year-old victim. The suspects have been charged with misdemeanor battery via sworn complaint.

ARCHER ‒ Quinnell Lavon Thompson, 43, was arrested on Tuesday, Jan. 10, and charged with aggravated assault, armed burglary, property damage and petit theft after allegedly entering a home under construction, stealing and returning a trail camera and threatening the property owners with a knife.

The owners of the Archer house, which is under construction, reported on Tuesday morning that they had placed a trail camera on a post facing the entry to the house and that they saw a man, later identified as Thompson, entering the house. They reported that when they arrived at the property, the camera was gone. They left and activated the GPS tracking tag on the camera, which set off an alert on the camera. The owners said that the camera was later returned and placed just inside the garage.

The victims reported that shortly after they discovered the camera, Thompson walked up to them and started yelling at them. He allegedly threatened them and held up a small knife.

An Alachua County Sheriff’s deputy responded and reported that he saw a man matching the description given by the victims and detained him. A search reportedly produced a small pocket knife in his pocket.

Thompson has seven felony convictions and is currently on probation for battery on a 70-year-old neighbor. Judge Walter Green set bail at $40,000. 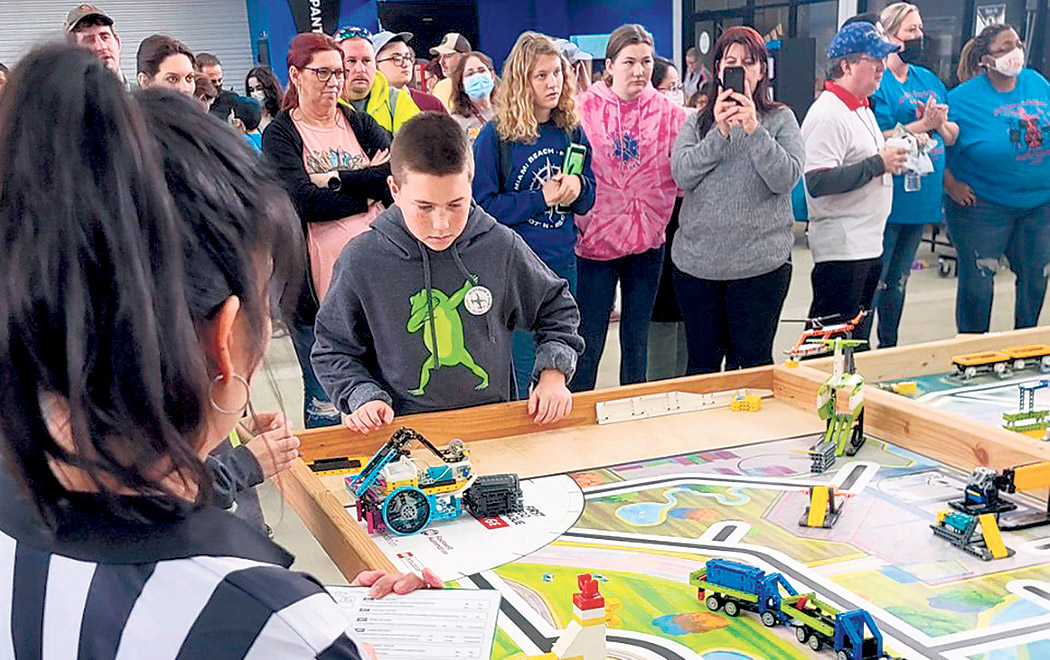 GAINESVILLE, Fla. ‒ Nearly 250 students from elementary, middle, and high schools throughout the district will face off in Alachua County Public Schools’ annual robotics competition on Thursday, Feb. 2, 2023.  There will be three robotics tournaments running simultaneously.

More than 70 registered teams will demonstrate their skills in developing, building and operating robots to perform specific tasks, all before event judges. There will be team skills contests as well as a Teamwork Challenge in which teams from different schools must work together to earn points.

All teams are vying for a spot in the Central/North Florida State Vex Competitions held in late March, with the chance to possibly compete at the Worlds Competition in May.

The competition is being sponsored by Gas South, whose donation this year help fund the robotics competitions. In addition, the ACPS Robotics Program received a STEM grant from the Education Foundation of Alachua County to help purchase new and replacement equipment and field expansion kits earlier this school year.

Closing ceremony and awards: 4 – 4:30 PM, likely in the Auditorium