Around 11 p.m., on Saturday, March 8, the Alachua County Sheriff’s Office responded to the area of 7400 SE 225th Way regarding a noise complaint regarding loud car stereos in the area. Deputies arrived on scene to find a “block party” style celebration occurring with several hundred people in the area. At approximately 12:25 a.m., Deputies reported hearing multiple gunshots and located one adult male with a gunshot wound to the neck, he was transported to a local hospital with non-life threatening injuries. Additional deputies responded to secure the area and eventually the SWAT team responded to assist with securing the crime scene and searching for other wounded victims. No other victims were located on scene, however one juvenile male arrived at a local hospital with a gunshot wound to the chest and is undergoing surgery. There are no identified suspects at this time.

The investigation is ongoing and detectives and crime scene personnel continue to work to analyze evidence and determine what took place.

We are ask that anyone with information they feel may be related to this investigation to contact the Combined Communications Center at 352-955-1818. Callers can also remain anonymous and be eligible for a reward of up to $1,000 for information leading to an arrest by calling Crime Stoppers at 352-372-STOP (7867).

LIVE OAK – The Suwannee River Water Management District (SRWMD) has submitted its report on the application by Nestle Waters to take 1.5 million gallons a day from Ginnie Springs to sell as bottled water. Staff recommendation is to deny the permit based on incomplete information in several areas supplied by the original permit owner or Nestle.

The original permit, owned by Seven Springs Bottling Company, was originally issued on Sept. 11, 1995 and modified on June 25, 1999 and allowed for a total of 1.5 million gallons a day, but has never exceeded one third of that amount. Nestle plans to pump the full amount allowed by the permit.

According to Katelyn Potter, spokesperson for the SRWMD, the renewal application does not provide specific information about engineering plans to ensure it will be able to accommodate for all of the water it plans to pump.

The permit applicant, Seven Springs, also declined to provide a copy of its contract with Nestle, and instead, provided a memorandum of the contract. This memorandum does not show that the applicant is obligated to provide any or all of the requested allocation to Nestle.

As the highest reported actual use of water in the facility was significantly less than the requested amount, the previous use does not provide evidence of the physical ability to process the new amount requested by Nestle. Although they have stated that the facility is being renovated to handle the increased amount, they have failed to date to provide sufficient evidence that the renovations will create the necessary physical ability.

Based on the incomplete data, SRWMD staff is recommending that the permit be denied. The recommendation will be reviewed by the Suwannee River Water Management District Governing Board at the upcoming March 10 meeting and public hearing. The Board can approve or reject the recommendation at that time.

The Alachua County Youth Fair and Livestock Show Association is a non-profit organization that conducts and operates public fairs and expositions on agricultural matters and, more particularly, to the exhibitions of livestock, poultry, crafts, youth projects and farm products. The fair is an educational platform for the youth in Alachua County who are interested in agriculture. Youth will exhibit both livestock and non-livestock 4-H & FFA projects.

"Working with livestock and other agriculture events through the youth fair prepares future citizens of Alachua County to be knowledgeable about agriculture production and land use," Sanders said.  "This benefits Alachua County by providing citizens the opportunity to see our 4-H & FFA youth projects".

Alachua County 4-H and FFA youth ranging in age from 8 to 18 can participate in the Alachua County Youth Fair and Livestock Show. Come out and support our 4-H & FFA youth.

MICANOPY – A public hearing regarding a proposed median modification on State Road 25 along U.S. Highway 441 was held Wednesday, Jan. 29, at the town hall building, 706 N.E. Cholokka Boulevard, Micanopy. The event began with an open house from 4 – 5:30 p.m., followed by a public comment period at 5:30 p.m. Approximately 20 attendees had the opportunity to view displays and discuss the proposed changes with project staff and consultants.

Being proposed is the closing of a full median opening along U.S. 441 and upgrading the traffic signals at the intersection of U.S. 441 and County Road 234W. These proposed improvements are part of a larger project that will resurface the pavement of U.S. 441 and make operational and safety improvements between the Alachua County line and State Road 331/Williston Road.

Although the purpose of the meeting was to discuss the median modification, most residents expressed relief at the addition of the traffic signal. Some expressed concern at how dangerous the intersection had become. Residents said they hoped the signal would improve safety at that location. “The proposed modifications are expected to reduce conflicts and enhance safety,” said FDOT’s Derrick Richardson.

Project documents available at the public hearing have also been posted online at www.nflroads.com. 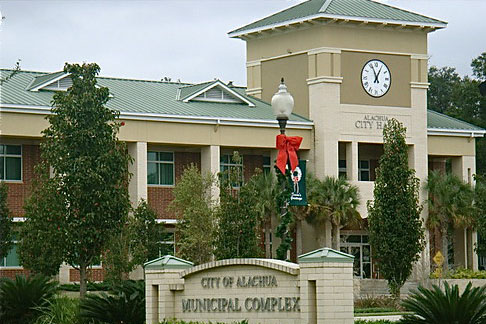 ALACHUA – The City of Alachua has cancelled the scheduled April 14, 2020 municipal election. The City of Alachua’s qualifying period for the election ended at 12 p.m. on Feb. 25, 2020. Current City Commissioner Dayna Miller was the only individual who submitted the necessary documents to qualify for the Seat 3 election.

Since Miller was the only qualifier for Seat 3, and there are no other races or matters to be placed on the scheduled election, the City of Alachua has cancelled the election. Miller first came to the commission on an interim basis and was subsequently elected in the 2017 election, garnering a three-year term, which ends this year.

Miller’s swearing in ceremony will be held April 20, 2020 as she enters her second three-year term.

NEWBERRY – County Assistant County Manager and Chief of Staff Gina Peebles addressed the Newberry City Commission at the Feb. 24 meeting to provide an update on the progress that has been made at the Alachua County Agriculture & Equestrian Center.

Peebles presented the proposed layout of the facility and said that the Alachua County Board of County Commissioners (BoCC) allocated $13 million to the project at their Feb. 11 meeting, which was more than they had initially planned to allocate. This is in addition to the $3.8 million they paid to purchase the property.

Referring to a map showing the layout of the property, Peebles said the items in blue were required improvements and then she explained the reasons. “Homes were encroaching on the north property line on the outdoor arena space. Also, with the addition of a 50-foot vegetative buffer, that facility needed to be relocated. Our drainage was on an adjacent piece of property so we have to move the drainage onto our site,” she said. “Also required were ADA improvements and site work in addition to the new IFAS Center and Auditorium.”

In addition to the required improvements, Alachua County approved additional items as well. Those improvements include a new restroom building to accommodate a full arena seating capacity. They also include improvements needed to the arena in addition to ADA improvements. “We have some beams that need to be repaired, a new roof will be constructed and some concrete on the outside to assist with erosion will be done,” she said.

The existing pole barn at the current east Gainesville location will be relocated to the current facility. “It was originally purchased with Youth Fair funds so they are going to work with us to relocate that building out here. The Board also really wanted additional landscaping above and beyond what is required by code,” she said.

Peebles also showed a layout of the IFAS facility, which will encompass 7,043 sq. ft. It will include a conference room that seats 15, 10 offices and a lab.

She also reviewed the Auditorium Building, which will encompass 12,498 sq. ft., 4,546 sq. ft. of which will actually be the auditorium itself. The auditorium has a capacity of more than 300 occupants and is divisible into three smaller rooms. There will also be a kitchen a lobby and other needed rooms and facilities.

According to the work schedule provided by Peebles, final civil/site work design should be completed by April with a notice to proceed to occur in June. Final construction documents will be ready in July with a notice to proceed for remaining construction elements to be scheduled for October. Civil work, such as ponds and utilities, should be completed by December. Construction of the three buildings will come next and will run into 2021 with a final construction completion time estimated to be December of that year.

The only commission question had to do with the orientation of the buildings. Peebles pointed to the lobbies of both buildings indicating they would be facing each other. At some point county commissioners would like to see some type of covered walkway between the entrances to both buildings, but at this time that has not been budgeted Peebles said. 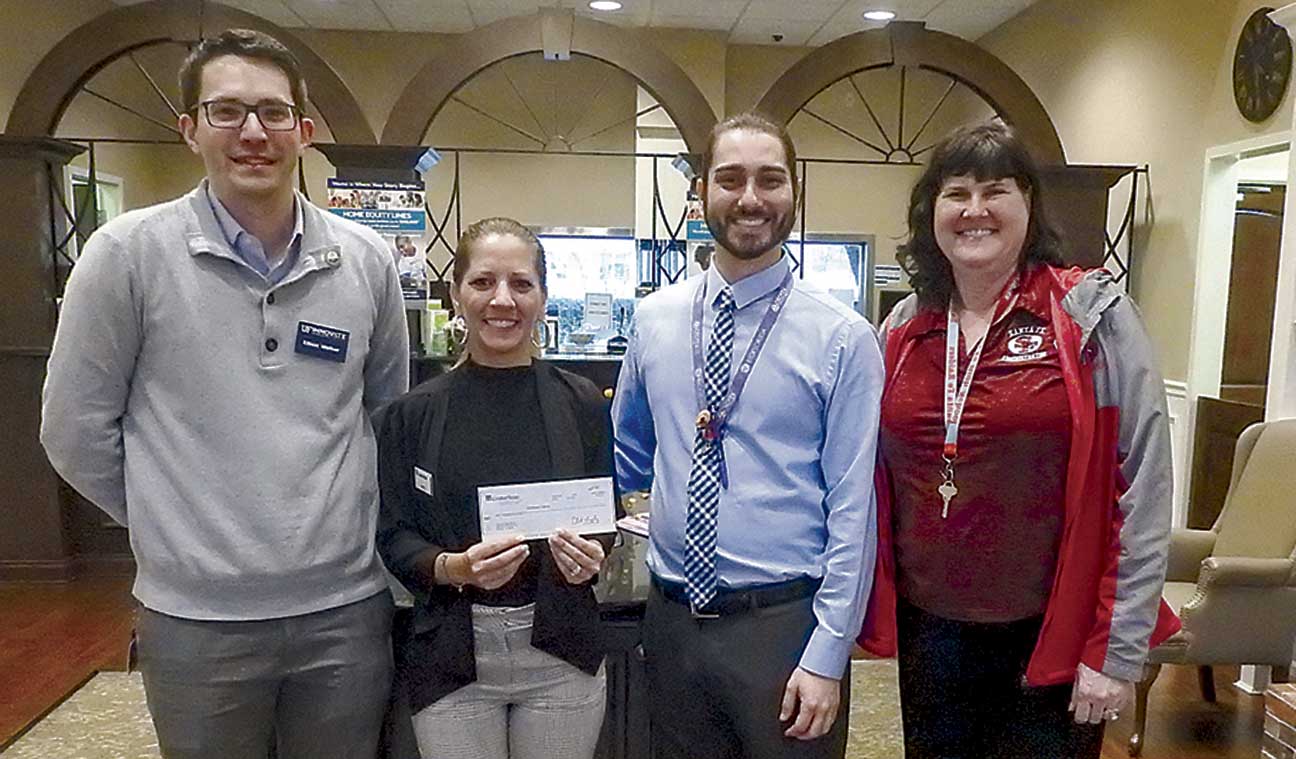 Under the direction of Oyama, the biotech program is a three-to-four year commitment that can earn high school students industry certification through the Biotechnician Assistant Credentialing Exam (BACE). Students in the Academic Magnet Program are experiencing hands-on learning to prepare them for jobs in the biotech industry immediately out of high school or training for a college curriculum in the biotech field.

Students conduct labs using current techniques and equipment they would see in the industry and develop the skills and knowledge to pass the BACE. Participants experience an intense program, testing themselves with college level science and math content while still in high school. To stay with the program takes dedication and hard work.

Biotechnology is changing the world and the job market. Currently, there are more than 250 biotechnology health care products and vaccines available to patients, many for previously untreatable diseases. Biotech is saving lives and improving health by harnessing nature's own materials and using genetic makeup. The technology is reducing rates of infectious diseases and reducing life-threatening conditions affecting millions around the world.

More than 13 million farmers around the world use agricultural biotechnology to increase yields, prevent damage from insects and pests and reduce farming's impact on the environment. Biotechnology has helped increase food production by improving crop insect resistance, enhancing crop herbicide tolerance and promoting the use of more environmentally sustainable farming practices. This has helped generate higher crop yields, lowered the amount of agricultural chemicals required by crops, which limits the run-off of these products into the environment and using biotech crops that need fewer pesticides.

UF Innovate at the University of Florida was created to foster innovation and research while also promoting entrepreneurship and business growth in science. UF Innovate connects innovators with entrepreneurs, investors and industry. They help startups and growing tech companies learn how to run business as well as conduct research. Many of the startup companies are located in Alachua's Progress Park at UF’s Sid Martin Biotech, a world-recognized leader in biotechnology business incubation. Both the University of Florida and Santa Fe College have strong departments in science, math and medical fields, which strengthens the local workforce of biotech employees that are employed locally by companies in the biotech industry.

UF Innovate Sid Martin Biotech sees the potential of Santa Fe High School’s role in preparing students and helping them transition into jobs in biotech and to college. Alachua’s Center State Bank Branch Manager Mincey also recognizes the work of these students, and as a sponsor for the UF Innovate program, the bank helps grow biotech industry businesses, assisting many of the startup companies at Progress Park. UF Innovate also has started a Go Fund Me site to raise $3,000 to buy textbooks for the program as well.