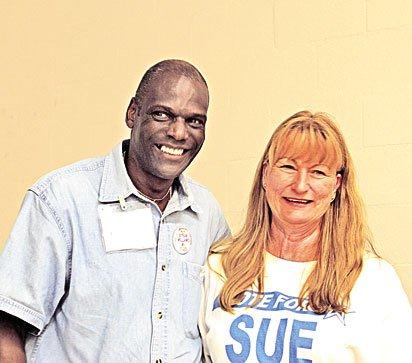 Sue Weller and Byran Williams will fill the two open seats on the High Springs City Commission.  Their victory Tuesday night ended an election cycle where five candidates, including the current mayor, vied for the two vacancies.

Of the five candidates running for two spots on the High Springs City Commission, the three who lost had more votes together than the total between the two winners.

The number of votes cast for candidates Bob Barnas, Linda Clark Gestrin, and Bill Coughlin was higher than the total number garnered by Sue Weller and Byran Williams.

With close to 800 votes, Weller will take seat for a three-year term. Williams, with just over 700 votes, will fill the one year remainder of Diane Shupe’s term.

When Shupe resigned in February, her seat was temporarily filled by the appointment of John Hill, who was not a contender in Tuesday’s election.

Clark Gestrin fell short to third place despite having over 600 votes, and Coughlin ranked fourth with a little over 500, followed by Barnas with just under 500.

These numbers include early and absentee ballots but are not yet officially certified results.

While champagne flowed in the winner’s circle at The Great Outdoors Tuesday night, there was nothing but grim, teary-eyed faces one door down at the Coffee Clutch.

Family, friends and supporters congratulated Weller on the patio of the downtown restaurant as they exchanged hugs and shook hands.

One wall and almost 300 votes separated her from Barnas, as he sat at the coffee shop’s computer next door, mulling over election results with his wife.

Coughlin sat across the room, and between them was a table covered edge to edge with trays of food that had barely been touched.

This was Barnas’ second consecutive failed attempt at running for the city commission. He said after the way this election went he pondered if it would be his last.

Other options on the ballot included a city referendum to allow the commission to grant tax exemptions to new or expanding businesses, and the charter amendment altering the process for filling vacant commission seats mid-term, and both were passed.