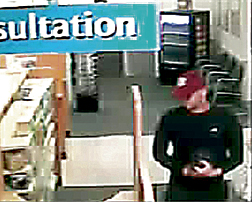 The robber was caught on video as he approached the CVS store’s pharmacy counter, brandishing a gun and demanding Oxycodone pills.

The CVS Pharmacy in Alachua was the scene of a robbery involving over 200 Oxycodone pills.  At about 9 p.m. last Wednesday, a man entered the store, approached the pharmacy, displayed a black semi-automatic pistol and demanded the pills.  The robber was reported to have said, “Don’t make me use it,” referring to the gun.

The pharmacist handed the pills to the robber, who then fled on foot.  The robber was described as a white male, approximately 25 – 30 years of age wearing a dark blue or black long sleeve Under Armour type shirt, black athletic shorts and a red Florida State baseball cap. He also is believed to have a tattoo around his left ankle and wore white or grey sneakers.

The Alachua Police Department (APD) set up a perimeter around the area, and with assistance from an APD K-9 and the Alachua County Sheriff’s Office air support, conducted a search.  The robber was not located and was believed to have fled in a waiting vehicle.

Oxycodone is a schedule II narcotic analgesic also marketed as Tylox, Percodan and OxyContin. Although pill theft is a nationwide problem, APD spokesman Officer Jesse Sandusky said the robbery was the first of its kind in Alachua.

Local authorities are continuing the investigation and believe there may be a connection to a similar incident in Lake City, which occurred about three weeks ago.  Sandusky noted that about three hours before the robbery in Alachua, there was an attempted robbery at a CVS in Lake City.  That robbery was unsuccessful, but the robber fit the same description as the robber in the Alachua incident.