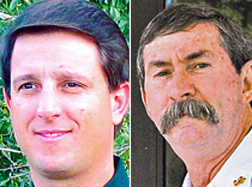 The City of High Springs is losing both its police chief and fire chief this Friday at 5 p.m.

The employment contract for High Springs Police Chief James Troiano will be terminated according to a press release issued by Interim City Manager Jenny Parham.  The press release also noted that on Monday Fire Chief Verne Riggall submitted his resignation, which will also be effective Friday.

“The proposed FY 2011/2012 budget contains a salary reduction for the Chief of Police and proposes elimination of the Fire Chief’s position,” Parham stated in the release.

“Since coming to the City of High Springs, Chief Rigall and Chief Troiano have made a positive impact and improvement to both departments and the overall safety of the community,” she wrote.

In Riggall’s resignation letter, he wrote, “Current issues and the proposed elimination of the Fire Chief’s position make it impossible for me to continue with my employment.”

Troiano will receive a severance pay of one half his annual salary, which is currently set at $77,000.

It may have been Troiano’s salary that ultimately led to the termination of his contract.

Troiano said the City wanted him to take a pay cut of as much as $20,000 annually.

By lowering Troiano’s pay, the commission could more easily hire a permanent city manager at a salary greater than the police chief’s, but still well below that of former City Manager James Drumm.

Facing termination, Drumm resigned Oct. 21, 2010.  He was provided with a severance of $66,434 and health benefits for six months.

Over the last year, commissioners have contemplated combining the police and fire departments into one public safety office, thereby eliminating the need for two chiefs.  It appears that those considerations may be coming full circle as both men will leave their posts Friday.

But Troiano said he believes the move is a mistake.

“Right now, we have two working chiefs, but we’re going to create one position with someone who is so overworked that they can’t do anything but push paperwork every day,” he said.

The police department will be working with an even small staff given Troiano’s departure on Friday.  The High Springs Police Department (HSPD) currently has 11 police officers, including Troiano, an office assistant and a police service technician/office assistant.  On Friday, that number will change to just 10 officers.

During the weekdays, the police chief, a lieutenant and a police officer are the only officers on duty, Troiano said.

“The [City] has put us in a position that we are below critical staffing levels,” said Troiano.  “I work for [the commission] and if they say this is what happens, then I carry the flag, and I do it.”

Although Troiano has been criticized in the past for his management style, he believes much of it was unwarranted.  “It was a contrived attempt by the PBA and a few other people to try to overcome the changes we’ve made here,” he said.

In defending the department and his own record, Troiano said, “This has absolutely nothing to do with performance…if it did, I would have an ‘A’ right now according to the city manager.”

“I’ve been honored to be the police chief here; I’ve learned a lot and I’ve made a lot of good friends,” he said.  “We’ve had a huge impact here on the City.”

In a memo to his staff, Troiano wrote, “Together, many of us have had to endure much and have grown stronger by overcoming the obstacles many have put in our way. This change and strive for excellence has resulted in a new department; one where you have all embraced a philosophy of change that included training, technology, accountability, integrity and professionalism.”

Although he’s leaving HSPD, Troiano said he wouldn’t be leaving law enforcement as he said he plans to be a “strong advocate for the employees of the Alachua County Sheriff’s Office.”

“I’m concerned that the changes at the Sheriff’s Office have not been productive,” Troiano explained, adding that he believes some people at the Alachua County Sheriff’s Office (ACSO) are paid “exorbitant salaries.”

Troiano’s tenure as Chief of HSPD began in March 2008 after some 20 years at ACSO where he rose through the ranks to become a lieutenant.  The City of High Springs hired him on a $75,000 per year salary and a five-year contract slated to end in 2013.

Filling Troiano’s position on an interim basis will be Lieutenant William Benck.  Riggall’s interim replacement at the High Springs Fire Department will be Captain Bruce Gillingham.