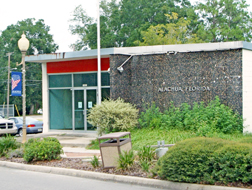 Grant funding received by the Alachua Chamber of Commerce will be used to renovate the city’s former police station for use as a welcome center and office.

A vacant Main Street building that was once a United States Post Office and later the Alachua Police Department will soon serve another purpose thanks to a $25,000 grant.

Awarded by the Alachua County Tourist Development Council (TDC), the grant provides a match to funds raised by the Alachua Chamber of Commerce for the purpose of renovating the old police station to create a welcome center.

Board member Linda Rice Chapman submitted the grant in hopes of obtaining funding to augment a building fund already underway by the Chamber.  When she received the news last week that the TDC was fully funding the grant, Chapman said she was overjoyed.

“I think this grant is the key to the success of our project,” Chapman said. “It’s what we have needed to make this project work.”

Renovations to the building include outfitting it as a welcome center for the Alachua area and Main Street.

“We want it to be a place where people who are visiting the area can stop in and get information about places to go, things to do and businesses nearby,” said Chapman.

Among the scope of work anticipated in the first phase of renovations is a new air conditioning system, electrical wiring and plumbing.

But the old police station will be much more than a welcome center for visitors.  Located across from Alachua County Today newspaper, the building will also become the Chamber’s first-ever permanent office.  The chamber’s new address will be 14801 Main Street, Alachua.

And thanks to a partnership with the Alachua Historical Society, a museum to be housed in the downtown center will give locals and visitors alike a bit of insight into Alachua’s more than 100-year history.

Phase one of the renovations will also include compliance with the American with Disabilities Act (ADA), making the building accessible to disabled individuals.

In conjunction with volunteers, the Chamber already conducted a workday during which interior walls, furniture remnants and debris were removed.  That came at a cost of about $250, Chapman said.  The Chamber spent another $3,000 for a contractor to remove asbestos from the building.

Phase two renovations would include additional cosmetic upgrades including exterior work and landscaping.

The entire renovation project is expected to cost an estimated $70,000.

In May, the Chamber and the City of Alachua, which owns the building, signed a lease on the facility.  Alachua Mayor Gib Coerper, City Manager Traci Cain and Chamber President Bob Page inked the lease agreement during the Chamber’s annual banquet in May.

The deal had been several years in the making, first surfacing when the Alachua Police Department began moving into its new location in 2006.

In lieu of charging a fee, the City agreed to provide the space to the Chamber in exchange for the Chamber’s repair, maintenance and general upkeep of the building in addition to continuing to fulfill the common business interests it shares with the City.  The term of the lease is 10 years.

The grant provided through the TDC will become available in the next fiscal year which begins Oct. 1.