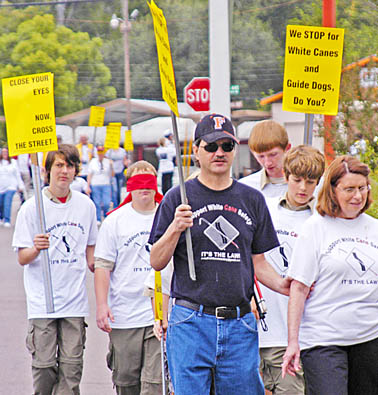 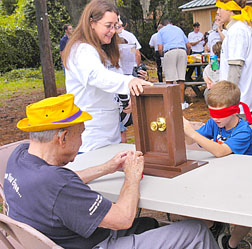 Photo 1: Saturday’s White Cane Walk in Alachua marked the 12th year that both sighted and vision impaired individuals joined together for a two-block walk alongside U.S. Highway 441 to create public awareness of the White Cane Law. Photo 2: A blindfolded Peyton Cain required several attempts to successfully use a key to unlock a door.  Facing Cain is 78-year-old Jack Varnon, who founded the first White Cane Walk in Alachua.

ALACHUA – Jack Varnon, 78, was taking a walk in Gainesville one autumn day in 1988. Varnon is severely vision impaired. He couldn’t see the cars, but he relied on his German shepherd guide dog Bandit to lead the way.

Bandit, living up to his name, led Varnon onto County Road 232.  As he was walking along the busy road, a car traveling at 55 miles per hour hit him.

He remembers the chrome strip on the car slicing his thigh as the fender folded up. The nurse at North Florida Regional Medical Center had to use an iodine sponge to wipe away the flakes of paint imbedded in the open wound.

Varnon had no broken bones. He said he had some knee problems and a laceration on the upper part of his thumb.

The walk started at the site of the former Alachua City Hall and ended near the Alachua Lions Club at the local Boy Scout Troop 88 hut. Some of the people walking were blind from birth. Others were not blind, but volunteered to hold signs or guide others. Some sighted people were blindfolded to experience what it is like to be blind.

The event was meant to raise awareness of the Florida White Cane Law, which mandates that all drivers must yield if there is a pedestrian crossing the street with a cane or guide dog.

When Varnon’s case went to court, he said the presiding judge had to research the Florida White Cane Law. Varnon said he was surprised the judge was uneducated about the law.

It was several years later that Varnon teamed up with Alachua resident Adam Boukari, who was 15 at the time, to organize the City of Alachua’s first White Cane Walk to raise awareness of the law.

Boukari was a Boy Scout in Troop 88 at the time, and took on the project to earn his Eagle Scout badge. At that time, and over the years, local Boy Scouts and Cub Scouts have actively participated in the walks.

Now, Boukari is 26, and though he missed earning his Eagle Scout badge by three merit badges, he still organizes the annual event. As assistant to Alachua’s city manager, he recognizes the importance of the Florida White Cane Law.

He said the goals of the annual walk are to raise awareness and share the information with people in the community.

Two people who participated in the walk Saturday were Michael Ferguson, 42, and Haylee Barclay, 16. Ferguson, a Gainesville resident, is blind. Haylee, a member of the Alachua Police Explorers program led him along Highway 441.

Ferguson couldn’t see the cars whizzing by on his right, but he could feel the autumn air bouncing back from the cars. He used a white cane to investigate the ground in front of him, as Haylee described the surface of the pavement and the upward curve of the hill.

Haylee had participated in the White Cane Walk in the past, but she had never led someone before Saturday. Together, she and Ferguson walked along side the road. Several members of the group held yellow signs that read, “We STOP for White Canes and Guide Dogs, Do You?”

“You sure you haven’t done this before?” Ferguson asked her.

Haylee said she was nervous to lead someone on the walk, but she learned some valuable lessons. She doesn’t have her driver’s license yet, but she said when she does, she will remember what she learned on the walk.

“I’m going to be extra cautious now,” she said. “I learned to be careful on the roads and watch out for everyone.”

Once the walk ended, hotdogs and soft drinks were served to those who participated. Several stations were set up for people to experience how someone who was blind might perform tasks such as unlocking a door or counting change. This year, there was a station that featured alarm clocks and watches altered to meet the needs for blind people.

Whether through walking blindfolded alongside a busy highway or through trying to accomplish everyday tasks, the annual event reminds and educates motorists about the importance of the Florida White Cane Law.

The Alachua County Council for the Blind has member meetings on the second Monday of the month at Kazbor’s Grille at 4860 NW 39th Avenue, Gaineville, from 5:30 to 7:30 p.m.