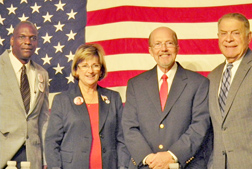 The New Century Woman’s Club asked the candidates a combination of prewritten and citizen-submitted questions.

The forum started with the candidates introducing themselves to the 70 attendees and explaining their reasons for running. All of the candidates affirmed their love for High Springs and commitment to its future.

Williams began the discussion, explaining that he is from High Springs and has been involved in local government since 2003.

Barnas said he believes that every candidate loves the city, but “that’s where the line in the sand gets drawn.”

“We have a great town, but it’s a mess right now,” he said. “We need to bring the passion back to the whole city. We need a change.”

Gestrin also called for a new direction in local politics, saying that the town must restore civility to its proceedings. She said she feels more women are getting involved in government because it requires certain skills they inherently have.

“We can balance a checkbook, we can stick to a grocery list and we can discipline the children,” she said. “The principles are the same.”

Travis expressed his confidence in the path the city is taking. He mentioned his leadership positions like chair of the Economic Development Task Force and president of the Alachua County League of Cities, citing his six years of service as proof of his success.

“A lot of tough decisions were made in the last year, but they were made so we can move forward,” he said. “This city has grown. This city has things working in its favor that it never has.”

As the forum moved into the question period, disagreements arose about how to handle the city’s problems. One such issue has been central to the campaign thus far: High Springs’ economic development.

Travis admitted that the issue has plagued the sitting commission for the past few years. He said the problem is not the city’s friendliness; rather, businesses have trouble staying open because of limiting ordinances.

Williams said improvements in zoning and the ease of obtaining business permits would give High Springs a better image. He said this would make it more appealing for businesses to come into the city.

Barnas expressed his frustration about the path the commission has taken. He said it is important to be realistic.

“Bring people here, start slow,” he said. “This has been talked about for the six years the incumbents have been in office, and we’re still talking about it today.”

Gestrin agreed, saying that the city needs more than talking about economic development. She said action must be taken, likening the current commission’s action to driving a car.

“You put the gasoline in the tank, you’ve got the keys in the ignition, the tires are there, but you don’t know how to turn the key,” she said.

Williams stood up, responding passionately to Barnas and Gestrin. He said the divisions in High Springs make governing difficult.

Barnas and Gestrin offered economic opportunities in response, saying that the community must capitalize on things like the rivers, railroad and theaters. Gestrin again said the time for talking has past.

“I’m ready to get things done,” she said.

Earlier in the forum, she said putting ideas in writing was one thing, but living the decisions made a big difference. She said the city needs a change in leadership to bring about the necessary differences.

Travis said his record of success speaks for itself.

“You don’t know me too well, Linda,” he said. “I’m a pretty nice fellow. All my awards, you don’t get those for being a bad person.”

He said he has personally taken steps to bring business to the town. He said he went to Publix a year ago and brought them to High Springs. However, he said, the city needs to bring development across the 441 corridor.

“We’re not far off, folks,” he said. “But if we do not have the infrastructure in the ground, it’s not going to happen.”

The candidates also discussed the noise ordinance, the city manager form of government, the proposed preamble to the city charter and their personal volunteer efforts.

Williams closed by saying that he has no personal agenda, wanting the best for every citizen in High Springs. If the citizens could put aside their differences and have intelligent discussions about the issues, the town could really prosper, he said.

“I feel like I’m in a fist fight,” he said. “If we come to the table and set aside our differences, this can be one of the greatest cities in the state of Florida. We have wonderful, wonderful people.”

Travis affirmed his dedication to the city. He spoke out in support of the efforts of the current commission.

“I’ll die here. My ashes will be spread on my farm,” he said. “This is my city. I’m glad I’m an incumbent that’s been part of building this city.”

He explained that neither Barnas nor Gestrin have experience in local government. He said he started out by volunteering with city boards.

Gestrin rebutted firmly, saying that she has done her part for the town, helping various individuals and groups in need.

Barnas said he has tried to get involved in government committees before, but has been turned away because of his name. He said because he is a controversial person who is willing to disagree with people, his ideas have been ignored.

“We need to let everybody speak and not shut them down,” he said. “Enough is enough. We will get it done.”

The general election will be held on Nov. 8.  High Springs Citizens will be casting ballots to fill the two commission seats as well as approving or denying six amendments to the city charter.