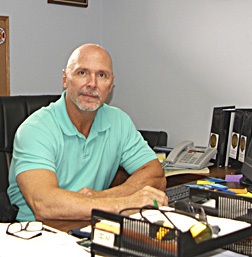 The interim chief’s initial resignation on Monday was a short 18 words.  But in a second letter on Tuesday, Benck said he learned that Interim City Manager Jeri Langman was not “completely satisfied” with the brief nature of that communication.  He then provided a list reading like a dossier of the issues over which he took exception.

In his second letter of resignation, Benck alleges that at a meeting of the High Springs Police Department (HSPD) officers Langman made insulting comments.

Specifically, he wrote, “…You told them you wanted this town to be more like Mayberry and they should be more like Andy and Barney…Mayberry does not exist in 2012, the world has changed since the early sixties, there is more traffic, people and crime.

“There were 164 officers killed in the line of duty in 2011, any officer attempting to emulate the style of Andy or Barney in 2012 runs a great risk of joining the ranks of fallen heroes,” he stated in the letter.

Benck’s resignation follows a series of disagreements he had with the recently-appointed Interim City Manager.  The latest dispute apparently came Jan. 18, when Langman had a letter hand delivered to Benck with instructions on when he should be working.

“…I am also requesting that you are either at the office performing your duties or performing patrols during normal office hours,” Langman wrote in the letter.

“I have requested that you or your staff notify me when you are outside the City of High Springs during your working hours for more than 1 hours and indicate who will be in charge of the department during this time,” she wrote.  “As a head of our High Springs police department, you report directly to me, therefore you must inform me of any vacation time prior to taking this and you must also advise me when you are out of the office and unable to perform your duties.”

Benck suggested that Langman was part and parcel of a violation of HSPD policies when she purportedly met with one of the chief’s employees behind closed doors.  “If the chain of command is to work it must work in both directions,” he wrote.

He also sharply criticized Langman for essentially overturning the firing of an officer.  “At the time, this employee was on probation, which allows for termination if it is believed that the employee’s performance is substandard, which it was and continues to be.  You would not allow this regardless of the above opinions and again, the support of the city attorney.” Benck wrote.

In a Jan. 23 memo, a frustrated Benck fired back at Langman’s assertions about his schedule writing, “I attend and conduct training anytime from 7am during the week to 7pm on Saturdays.  My phone rings and I respond 24 hours a day, 7 days a week.  Regardless of your position or rank in law enforcement, there are no normal office hours.”

In that same letter, he also takes Langman to task on her directives stating, “…I would think you would meet with me to discuss what needs this department has and how we can meet those needs to better serve all the citizens of High Springs.  This meeting has yet to take place.  Sending letters requesting changes that you do not understand can be damaging to this department.”

Benck also suggests Langman is micromanaging him, detailing several instances in which she provided specific instructions on law enforcement matters.  Benck noted that on Jan. 13, Langman asked him to create a directive instructing officers to act on the city’s noise ordinance, only after an incident involving one of her friends and the The Great Outdoors restaurant.

On Dec. 30, Langman asked Benck to establish a task force to quell reported problems of “young drivers” drag racing in their trucks and destroying the road with all-terrain vehicles (ATVs) during the weekends.

Benck objected to that in his resignation, writing, “You sent me an e-mail instructing me to form a task force to address a problem with ATV riders and young drivers on a roadway near your neighborhood.  I explained to you in my response that a task force was not needed and that increased patrols and selective enforcement would handle the problem.  This is [standard operating procedure] in law enforcement, and it accomplished the goal.”

Benck’s concerns with the department seemed to be echoed by former HSPD Chief James Troiano.  In an interview Tuesday, Troiano said, “My concern is that the safety of citizens of the City of High Springs is now in jeopardy.”

“They don’t have adequate staffing, now they’ll have no leadership.  It’s time for them to either hire qualified staff or turn it over to the Sheriff,” he said.

Troiano resigned from HSPD on Sept. 9, 2011 after the city sought to cut the police department’s budget and his salary.  Benck was tapped to replace Troiano on an interim basis.

Benck was a veteran police officer of nearly 30 years with the Gainesville Police Department (GPD) until 2010 when he retired and a short time later, joined HSPD.  His resignation is effective Feb. 6.

Langman on ATVs and task force