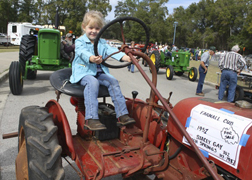 Kylee Barnes, 3, sits on a tractor 20 times her age at the 20th Annual Farm Toy and Tractor Show in Newberry on Saturday.

NEWBERRY – Though brown weeds once grew in the gaps of the hunk of garbled red metal, on Saturday, the tractor was a shiny showpiece.

The owner of the 1948 International Harvester tractor was Dan Haas of Ocala. He wore a red baseball cap and a grey shirt that exclaimed, “Yes, I was born in a barn!”

Haas was just one of the tractor owners to participate in the 20th Annual Farm Toy and Tractor Show on Saturday.

“This brings back fun memories,” Haas said. “Life was harder manually, but life was simpler.”

Hosted by the Newberry Lions Club and the North Florida Antique Tractor Club, the show brought over 500 people to Oak View Middle School to either show off their tractors or watch the tractor parade, according to Lions Club member Don Davis.

Inside the cafeteria, toy tractors, toy seed planters and farm memorabilia were available to purchase.

Jay Grams and his grandsons, Evan Sterry, 15, and Jacob Sterry, 12, had a pink toy tractor for sale. Evan Sterry said the tractor had been sold within the first hour of the event.

Grams said the pink farm toys were especially popular with their female customers. “If they sell well, I might start painting equipment pink,” Grams said.

Grams and his family are from the Ocala area, but other vendors, like Less and Bev Horst, travelled from outside the state for events like these.

Originally from Indiana, the couple has been to 25 different states for farm toy shows. Less Horst said he never takes credit cards for his business, but instead takes a check and a handshake.

Outside, kids were able to take a hayride and spectators could enjoy a burger and watch tractors try to roll a barrel.

At 1 p.m., the tractor parade began. Lines of red, green and yellow tractors grumbled as if they had been awakened from a deep sleep. The owners paraded the decades-old tractors around a cemented path for spectators.

High Springs resident Jarrett Davis, 6, rode a 1948 Ford tractor with his great-uncle, Tommy Copeland. Jarrett said that when driving a tractor, one has to be careful “so we won’t smush stuff.”

Copeland lives in Archer but has been a part of the show since it began in 1992. His tractor has been in the family since his grandfather purchased it for over $2,000 in 1948. That makes the tractor at least two years older than Copeland.

Someone once offered Copeland $10,000 for the tractor, but he refused to sell it.

The Newberry Farm Toy and Tractor Show began when Gene Swilley, who worked at a John Deere Dealership at the time, suggested the idea to Davis. They made several trips to other farm toy shows around the state, Davis said.

They only had five tractors in the first parade, Davis remembered. He also remembered the “light drizzle” on the first day.

Local resident and Lions Club member Bill Stone also remembers the past shows. “I don’t care how cold it got or how hard it rained - there’d always be tractors,” he said.