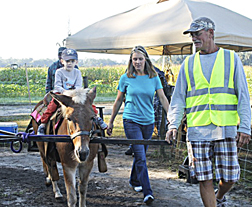 The fall festival, located at 3831 NW 156th Avenue, is open to the public Fridays, Saturdays and Sundays. Schools and children’s groups are invited to book field trips during the week to visit the farm.

Once guests enter the farm, they are greeted with a variety of games and attractions. The festival features duck races, pony rides, games, slides and swings, a petting zoo with cows, pigs and another farm animals, and more.

“We’ve been here forever,” he said. “I was born right down the road.”

He said he came up with the idea for a fall festival after seeing it on a friend’s property in Georgia. He said he’s pulled a lot of ideas from fall festivals around the country to create the best event possible.  This is the fourth year Rogers Farm has offered a fall fest.

“We like to see the kids have fun,” he said.

After 8 p.m. on Fridays and Saturdays, the farm offers a 10-acre haunted corn maze and spook trail. Rogers said the farm sees an increase in college students those nights.

“We really do it in the daytime for kids,” he said. “We try to cater to the kids.”

Rogers Farm advertises on local radio stations, but he said a lot of their customers hear about the farm via word-of-mouth.

The festival opened Sept. 29, and it will run until Oct. 28.  It’s $8 admission for the games and activities, and $8 for the corn maze and spook trail.  Attendees can pay $12 and participate in all activities. Children under 3 are admitted for free. There is a covered picnic area and plenty of burgers, hotdogs and treats offered through onsite concessions.  Friday hours are from 5 p.m. until midnight, Saturday hours are 10 a.m. until midnight and Sunday hours are 1 p.m. until 7 p.m.  If you’re traveling from Gainesville, you can reach the farm via SR 121 North to NW 156th Avenue.

Rogers recommends that all residents come out and visit.

“I’ve never seen someone not enjoy it,” he said.

Karla Jones, a Gilchrist County resident, visited Rogers farm during the day with her homeschool group.  She brought her young children with her.

“I find it interesting,” she said. “We’ve never been.”

Alesha Waller of Lake City brought her children as well. She said she came because she thought it looked fun.