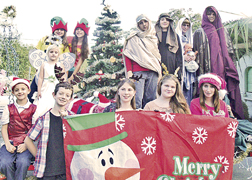 Newberry was humming with activity Saturday starting with the 6th Annual Festival of Lights at 2 p.m. in the downtown area followed by the annual Christmas Parade at 5 p.m. This year’s parade theme of Rocking 50s brought out floats, golf carts and trucks, funny cars, bands, an Elvis look alike and of course, the main event -- Santa.

NEWBERRY – Although the 2012 Newberry Christmas Parade began at 5 p.m. on Saturday, residents began celebrating early as the 6th Annual Festival of Lights kicked off events at 2 p.m. in downtown Newberry. The parade theme this year followed along with the Relay for Life theme, which is Rocking 50s.

And rocking they did with 17 floats, numerous golf carts and trucks, the Lake City Shriners with small funny cars and motorcycles weaving in and out, City commissioners and dignitaries on floats, and dogs dressed up in Christmas attire. Newberry High School was represented by their marching band, the Latin Club members dancing to Latin music and the Newberry High School Explorers.

Participants from Trenton, Alachua, Gainesville and Jacksonville took part in this year’s festivities. The Pit Sisters, a group who rescues pit bulls and rehabilitates them to become service dogs and pets, dressed their dogs in Santa outfits and other Christmas regalia as did the Phoenix Pit Bull Rescue group from Gainesville. “They were great fun,” said parade organizer Kathi Thomas. “They are doing a great service to the dogs and to the community,” she said.

Thomas said she started the Christmas parade after seeing that the other cities had one and thinking that Newberry should have one as well. Although she can’t remember the exact year she started, she believes this year marks the 12th anniversary.

Of course no Christmas parade would be complete without Santa Claus. The Main Street Organization, who hired Santa and Mrs. Claus for their event, loaned them both to the parade. They brought up the rear of the parade riding on the back of Newberry’s antique fire engine. Although Santa and Mrs. Claus, along with other visitors to the Festival, were held up on the east side of the railroad tracks for almost an hour by a train that blocked the entrance to the west side of Newberry Road, they eventually returned to the William Barry, Jr. Pocket Park to continue visiting with children, handing out candy and balloons to any child who visited Santa to tell him what they wanted for Christmas this year.

The train engineer, who was stopped and waiting for another train to pass through a section of track he also needed to run along, was persuaded to back up and open up the roadway into Newberry.

Downtown businesses stayed open late as visitors to the Festival of Lights also toured various shops and restaurants along the downtown area. The Main Street Organization hosted 19 craft vendors and two food vendors as part of their event, along with rides for the children. Redeemed, a Newberry musical group, provided Christmas music and upbeat gospel music to entertain parents and children alike as they visited with Santa and the crafters set up along the road side.

Festival of Lights organizer Barbara Hendrix started the event in conjunction with the Christmas parade in an effort to bring more people out to watch the parade and to hopefully visit some of the downtown businesses to shop. “This is something we do every year as a sort of Christmas present to our business owners and citizens, as well as to our craft vendors,” said Hendrix. This year a jewelry designer from Atlanta ventured down to Newberry to participate as a vendor and did quite well, according to Hendrix. “Charging nothing to the vendors makes it possible for them to make a profit, too,” said Hendrix, who makes sure all businesses benefit from the Festival of Lights.

The Main Street Organization also supports the Firehouse Gallery and Studio in downtown Newberry, which is open from 10 a.m.-6 p.m. daily, and the Newberry Tourism Center/Visitors Center.