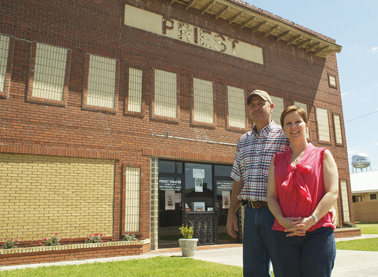 L-R: Alan and Janet Alligood hope to raise enough money to allow for upgrades to the Priest Theatre in High Springs. Among their amibtious goals is to convert from 35 mm film projectors to a modern digital projection system.

HIGH SPRINGS – The Priest Theatre in High Springs, located on 15 NW 1st Street, is reaching out to moviegoers and community members to donate money and help save the theater as it transitions into the digital age.

The independent movie theater along with many others across America is struggling to keep up the transition as the movie industry has made the switch from using 35 mm film projectors to digital projectors. The cost to continue showing movies and upgrade the projectors is about $85,000.

Janet Alligood, daughter of Priest Theatre owners Bobby and Janice Sheffield, has made it her mission along with husband, Alan, to help save the theater. The Alligoods created a “Save the Priest” webpage on Kickstarter.com to help raise funds and awareness.

According to the website, approximately $10,498 has been raised. The digital upgrade will allow movie studios and distributors to save money on producing and shipping movies. The new projectors also increase the quality of screening by increasing the movie’s lighting and clarity.

Alligood said besides working on the webpage she has been working with volunteers to help come up with other ideas to fundraise money which includes applying for grants. She also said the theater will be participating in the 37th Annual High Springs Pioneer Days celebration selling corn, giving tours of the theater and showing a free screening of western movie “Winchester 73.”

The Priest Theatre, which lies in the High Springs Historic District, was built around 1910 by William Jefferson Priest, who also owned the Ford dealership. Since its construction, the 103-year-old theater has transitioned from hosting traveling vaudeville shows to plays and from silent movies to “talkies.”

In 1986, the Sheffield’s bought the theater because it was near their hardware store and provided them needed access, according to the “Save the Priest” webpage. They decided to keep the theater as is and have restored and operated the theater ever since. In 2011 they put the theater up for sale because they could no longer keep up with cost. However, the theater did not sell. Alligood said she took this as a sign that she needed to get involved and save the theater from closing.

Along with the projector upgrade, donations made to the theater will fund projects to upgrade the digital surround sound system, docking station and server, digital pedestal, electric wiring, a flying silver screen, construction fees, installation and training.

Alligood says she wants to restore the theater’s stage and bring back live shows to the community.

The theater, which still shows movies three times a week, includes an auditorium that seats about 240 people, along with a balcony, sloping floors and a main lobby.

Donations are currently being accepted online at the Kickstarter’s “Save the Priest” webpage from now until June 3 at 7:01 p.m. However, Alligood said they will still be accepting donations at the theater after the deadline.

“I believe that if we bring [the theater] back to its beauty and restore it then it’s going to be something you can’t get anywhere else,” Alligood added.