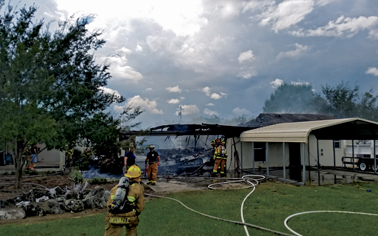 The garage and several vehicles were a total loss in Saturday's fire. (Photo special to Alachua County Today/Kevin Mangan)

NEWBERRY – A Newberry homeowner lost their garage and several modes of transportation in a fire on Saturday, Sept. 3.

Members of the Newberry Fire Department responded first to the fire, which was located at 27608 N.W. 46th Avenue, Newberry. Fire fighters and a tanker responded to the call for help, followed closely by multiple units from Alachua County Fire/Rescue and a second tanker from the High Springs Fire Department.

The cement block garage structure was detached from the house. “It was nearly 2,000 sq. ft.,” said District Chief Mick McAlhany, who is from District 5, but was working District 6 that day.

“Thanks to the Newberry Fire Department's quick response to the scene, the garage fire did not spread to the home,” he said.

Although the garage was detached, McAlhany said it was close to the house. “If Newberry hadn't arrived when they did, it could have caught the house on fire,” he said.

The garage had a bathroom and a workshop/garage area in half of the structure and vehicles in the other half of the building. The homeowners lost a Polaris ATV, motorcycle and a car in the blaze. The roof was entirely burned off, McAlhany said.

As to how the blaze started, “The homeowner said he parked his motorcycle in the garage after riding it. It backfired once,” said McAlhany.

The owner went into the house. When he returned he found the garage on fire and called for assistance.

It took approximately 20-30 minutes to extinguish the fire and check for hot spots to make sure the fire wouldn't flare up again.