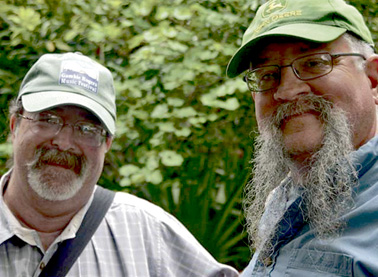 Cracker the Box, made up of Glenn Moody and Don Blitch will be performing Sunday at The Diner from 6 p.m. to 8 p.m.. (Photo special to Alachua County Today)

The event will bring together 10 different artists to eight different locations throughout downtown High Springs, according to a press release about the event.

Michael Loveday, the Music in the Park coordinator, said picking the artists was a collaborative effort between himself, Cassie Keenum, the president of the North Central Florida Blues Society, and Cindy Bear, who is member of the North Florida Folk Network.

Loveday chose Remedy Tree, an up-and-coming indie folk Americana trio out of St. Augustine, Brian Smalley, Cracker the Box and Keenum, who will be performing with Rick Randlett, Loveday said.

Remedy Tree, a group based in St. Augustine, is made up of Gabriel Acevedo, his wife Abigail, and Xander Lynn, a principle cellist who also plays for the St. Augustine orchestra. They will be opening up for Brian Smalley for Folk in the Springs from 5 p.m. to 6 p.m. at the Great Outdoors Restaurant.

Acevedo said he was delighted when he was approached by Loveday to play for the event, especially after their experience playing at High Springs’ last Pioneer Days.

“Michael Loveday is just a loveable guy pretty much,” he said. “I just really liked the opportunity to be able to open for Brian Smalley … We’ve been kind of watching him for over 10 years now.”

The band officially came together about a year ago after Acevedo, who had been playing bluegrass and folk music with his brother since he was 12, broke away and began penning his own songs and developing his individual sound, he said.

Abigail joined him on the guitar and Lynn would play with both of them after his orchestra practices, he said.

He said it’s often difficult to pinpoint what genre their music falls under.

“I like to call it indie folk Americana and then we have a lot of influences from old time and blue rock and even classical,” he said.

The band is currently working on an album that is set to be released later this year. Acevedo said he has done close to all the songwriting that will be featured on the album.

For more information on Remedy Tree, please visit their official website at www.remedytreemusic.com.

Cracker the Box, an Americana duo made up of Don Blitch and Glenn Moody and based in Gainesville, will be featured at the Folk in the Springs and will be playing at The Diner from 6 p.m. to 8 p.m.

Blitch said Loveday approached them to participate after seeing them perform a couple years ago at a Florida Folk Festival that had an unexpectedly generous turnout.

“We did both shows with Rick Randlett,” he said. “They anticipated maybe 40 people and we ended up with nearly 100 of them, so they had to get chairs and stuff. So it was very well accepted.”

Blitch said he and Moody are regulars at local music festivals and play at Satchel’s Pizza at least once a month.

He said their Americana sound is a conglomeration of a 60s psychedelic sound infused with folk and blues – one that is reminiscent of the Grateful Dead, as some listeners have told him, he said.

“But then again, we do some pretty strong blues stuff and it has a different sound,” he said. “It sounds like, for one thing, even though we have two guitars mostly going, it sounds like there’s more going on. There’s a lot of overtones and things happening.”

For more information on Cracker the Box, visit their Facebook page at https://www.facebook.com/crackerthebox.

On Feb. 9, 1964, an unknown band made up of four shaggy-haired British young men appeared on The Ed Sullivan show.

The lyrics of their song, “I Want to Hold Your Hand” were almost drowned out by the shrieks of girls in the background. But they were just loud enough to start a phenomenon.

Hundreds of miles away, a little boy named Rick Randlett sat in front of his TV and tuned in.

“And really from that point on, there was really nothing else I wanted to do with my life besides play music,” Randlett said. “I’ve played ever since.”

Randlett will be performing with Cassie Keenum from 6 to 8 p.m. at the El Patio restaurant in High Springs.

“We’ll do a few select covers,” he said. “We always just like to make sure that the audience gets involved with us and has a good time and makes a real participatory thing.”

When asked to describe his music, Randlett said while it is blues-based, he likes to deviate from a conventional sound that people might be used to.

“Even though I’m doing blues, there’s always more of a melody line than some blues has,” he said. “And I tend to write my songs about different subjects than standards blues… Every style of music has traditions that people stick to, and I try to stay away from some of that as much as I possibly can.”

One of Terry Whitehead’s nieces fell asleep in his arms once, and the song “Sleeping Child” was born.

The lyrics, inspired by that tranquil feeling, convey the profound importance of stopping every once in a while no matter how chaotic life gets.

“It’s a song that kind of describes things that comfort you and just the feeling of relaxation,” he said.

The singer-songwriter based in Atlantic Beach said that’s how he writes a lot of his songs. Whitehead will be performing at 3p.m. at the High Springs Fire Department.

Whitehead is part of the North Florida Folk Organization and said he was approached by Mike and Cindy Bear to play at the event. Cindy Bear will also be participating in the event and representing NFFN.

Whitehead eventually became part of a few classic rock bands and then an Americana band.

He has since splintered off to form a duo with longtime friend Dave Knopsnyder, who will be joining Whitehead on the electric guitar for Folk in the Springs.