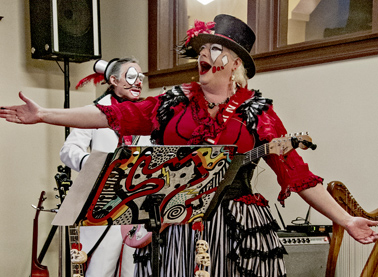 Dr. Sinn (Becky Sinn) sings during a performance at the Music in the Park series final show of the season. (Today photo/RAY CARSON)

HIGH SPRINGS – For Michael Loveday, Sunday was bittersweet. As the producer of the High Springs Music in the Park series, he had done 54 monthly consecutive shows. He had started from just an idea and himself on acoustic guitar, producing shows with no budget and little equipment. He bought the necessary sound equipment with his own money and taught himself how to run a soundboard. He then managed to convince the City of High Springs the value of producing a monthly music show in the park and that it would bring more visitors and increase revenue for local businesses.

Loveday was given a small budget from Community Redevelopment funds, and began the process of getting more musical acts. Over the months he produced shows with ever increasing professional acts in the park adjacent to the High Springs Police department. His shows became a Sunday staple in the community. But this Sunday, Oct. 16, marked the last show of the season. Now, as Loveday put it, “It’s time to take a break and reflect on many good memories of great local music”.

Many of the shows had featured folk music and acoustic acts, but Loveday wanted the last show to stand out, be something different and memorable. He had seen an act in Gainesville called Dr. Sinn's Freak Island Musical Sideshow. The act was part vaudeville, part burlesque and part circus, with a healthy dose of comedy and music to create a unique act.

The concept was the brainchild of Becky Sinn and Jenny Castle. Formed three years ago, the act had built a following in Gainesville and held regular shows at The Market Street Pub. Built around a cast of characters, mainly women, whose costumes mixed vaudeville, burlesque and clown makeup with ribald humor and songs, the act had a nucleus of five to seven members with others coming and going for occasional guest appearances. Sinn, who is a jazz vocalist, did most of the singing while the other performers provided the acting for the skits. They added multi-instrumentalist Don Austin to provide most of the musical accompaniment and began performing.

The act was unique and talented. But there was one problem for Loveday. Much of the humor and skits were risqué and adult orientated. “I knew that might be a problem for a smaller community and our shows are family orientated,” Loveday said. He approached Sinn to see if they could revise their show for a more general audience. Sinn saw no problem with that. By placing more emphasis on the circus comedy and clown aspect with less on the burlesque, they could provide a show for all ages.

On Sunday, Oct. 16, they performed at the High Springs Historical Museum. With a mixture of song and comedy they produced several skits. In one, they included several members of the audience doing a chicken dance as Castle played a belt of rubber chickens with different tones. Another skit was based around TSA security guards, portrayed by Castle and Sally B Dash, and the surprising things they found in Henrietta Henhouse's luggage. A juggling act was also done by another character, Prince Elroy. Throughout the performance Don Austin played a variety of stringed instruments as the character called Fiddlesticks, to provide music for the skits. The actors also added elements on mime and tap dancing to the skits. In a reference to local environmentally sensitive springs, they whole troupe did a skit about polluting the water supply. The show is a unique blend of many entertainment styles and techniques and was a fitting temporary finale to the Music in the Park series. The series will return in spring 2017.