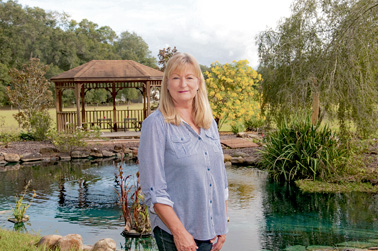 Retiring High Springs City Commissioner Sue Weller in her backyard, which she designed herself. Weller is stepping down after serving multiple terms on the city commission. (Today photo/RAY CARSON)

HIGH SPRINGS – For retiring High Springs Commissioner Sue Weller it's always been about community and the people that live in it. In the 12 years since she moved to High Springs, Weller has been elected to be City Commissioner three times, Mayor for two terms and Vice Mayor for one term. She has also served on various commissions and task forces for city landscaping, historic preservation and economic development. All of which has made for a very busy schedule for someone who retired when she moved here. But she also has the type of personality that likes to stay busy and always seems to have multiple projects going at the same time that would overwhelm many people.

Weller never had plans to be a career politician. She certainly didn't do it for the money, since commissioners get paid $6,000 a year and being Mayor earns only an additional $500. Both jobs also take a lot of time and commitment. For Weller it has always been about being part of the community and trying to improve the town economically while maintaining its small town charm and historic significance.

“For a town to survive, you have to be able to bring in people and business, but you don't want to lose the lifestyle and appeal of a small town,” she said.

A native Floridian, Weller was born and raised in Miami. She first visited the North Florida area when she went to college at the University of Florida. It was there that she met her future husband, Tom Weller, who was attending law school at the university. They fell in love and got married and have been together for 37 years.

She was studying labor relations while he finished law school, and after graduating they returned to Miami to pursue their careers. For the next 24 years Sue Weller worked for the City of Miami in the field of labor relations eventually becoming Miami's Labor Relations Officer. During this time she also was heavily involved with the Public Employer Labor Relations Board both for Florida and nationally, serving as the President for the Florida board in 1986 and the national board in 1995. While still employed by the City of Miami she also served as the Executive Director for the Florida Public Employer Labor Relations Association for eight years.

In 2004, she decided it was time to retire after 24 years with the City of Miami. She and husband, Tom, had been discussing moving out of the big city and finding a small town with a more relaxed lifestyle. “We wanted a place that was close to a big town for the stores and medical facilities but had that small town environment.

“We knew of High Springs from our college days and began looking in the area for land on which to build. We found the perfect piece of property and made the move,” she said. Tom moved his law practice to High Springs and they began to build on the property.

Typical of her multitasking personality, she also designed both the entire house and the landscaping to be their perfect place to live. Her husband is also a woodworking craftsman and built much of the interior cabinets and furniture, as well as the large wood deck in the backyard. Even though she had retired, she still wanted to be involved in the community and was soon serving on various boards for economic development and historic preservation.

“When we took our recommendations to the city commission, they ignored the task force's recommendations. You can't stop growth, more people are moving to small towns and so the best thing is to plan ahead for that. The commission rejected all our proposals” she said.

Upset, Weller decided the best way to change it was to run for the city commission herself. She won and in 2010 and became a member of the High Springs City Commission.

She pushed for creating more transparency in the city government and for economic development and revitalization of the downtown area while maintaining the small town identity of High Springs. After serving on the commission for only two years, she was elected by her fellow commissioners to the post of mayor. Over the next six years she would serve two more terms on the commission as well as another term as mayor and vice mayor.

This year she decided it was time to step down and focus on enjoying life. On Nov. 17 she will again step onto the dais at the commission meeting to receive thanks from her fellow commission members and then step down as her replacement steps in. But even in retiring again, she has plenty of plans.

“I want to travel...a lot. Tom and I have many places we want to see,” she said.

Although she designed all the landscaping and gardens at her property, she has had a lifelong passion for raising orchids. “I want to improve my orchid stock and take the Master Gardner program at the University of Florida.” She also wants to stay involved with the community through the Kiwanis Club and to continue to work on the Rails to Trails project, which will create a bike trail between Newberry and High Springs along the old railroad track.

“This is a project I have been passionate about and helped raise initial funds for development and leasing the property from the rail companies. However, Governor Scott then vetoed the project and the funds were withdrawn after the project had been started, leaving it in limbo. I want to try and get those funds back and see the project completed,” said Weller.

Even though Sue Weller is retiring from the city government, she still has a full schedule and that's the way she likes it.