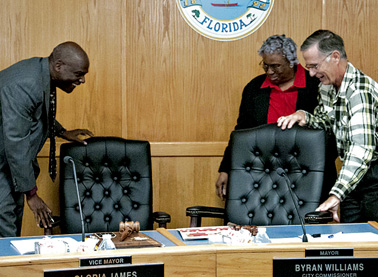 HIGH SPRINGS – It was a time of change at the High Springs City Commission meeting on Nov. 17. The meeting started with the standard procedures of the Invocation, Pledge of Allegiance and roll call, but it was the last time this particular roll call would be spoken. Newly elected officials were sworn in and seated and voting began shortly thereafter for the positions of mayor and vice mayor.

After six years of public service as mayor, vice mayor and a city commissioner, Sue Weller was retiring from government service and stepping down from the City Hall dais. In a departure from the standard arrangement, her microphone was decorated with an array of various colored balloons as a celebratory parting gift from some citizens sad to see her leave.

The first order of business was the swearing in of Linda Jones by City Clerk Jenny Parham. Several commissioners gave short speeches commending Weller for her term of service. Weller thanked the commission and citizens of High Springs for their support and stepped down from the dais. Although she was retiring from the commission, she said she'd still be around and still involved in her community. Her immediate plans, however, included travel with her husband.

Although Commissioner Jones took Weller's vacant seat on the dais, it was not long before a shuffling of positions occurred due to the election of a new mayor and vice mayor for the 2016/2017 term.

Following the election of Gloria James as the city's newest mayor and Jason Evens as vice mayor, another shuffling of seats occurred. The whole process had the look of a game of government musical chairs as the members rearranged positions, and sometimes actual chairs, as the audience chuckled. Parham made sure everyone's name tags went with the proper seating arrangement to help eliminate any further confusion during the rest of the meeting.

Once the members had taken their seats, appointments and re-appointments to various city boards were approved by the new commission. Linda Hewlett and Linda Schaladant were both reappointed to the Parks and Recreation Board while Daniel Wise was approved as an alternate for the board. Donald Alderman was approved as a new appointment to the High Springs Plan Board. Barbara Miller and Nancy Linkous were re-appointed to the Code Enforcement Board.

Voting on the positions of mayor and vice mayor take place each year in November, while some of the other board appointments have longer terms.