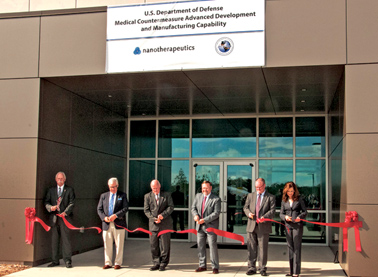 ALACHUA – On Dec. 7, Nano Therapeutics held a ribbon cutting for its new 183,000-sq.-ft. facility in Alachua. Nano Therapeutics is a bio pharmaceutical company that works with living compound matter to create vaccines, proteins and drugs to combat a number of illnesses. But this new facility has a different mission. It represents a partnership with the United States Department of Defense (DOD) to help develop counter measures and vaccines to protect our soldiers from biological and chemical attacks as well as infectious diseases such as Ebola.

The date of the ribbon cutting was intentional, marking the 75th anniversary of the surprise attack at Pearl Harbor. Several of the speakers at the ceremony mentioned Pearl Harbor, as well as other attacks and the need to be prepared in the future, especially against terrorism.

“The purpose and capability of this facility is to avoid another surprise and be better prepared. Sixty years after Pearl Harbor we were again surprised by the Anthrax mailings and other events of 9/11,” said Chris Hassle, Deputy Assistant Secretary of Defense for Chemical and Biological Defense. “We need to be aware of what we can do to avoid surprise, to defend it and respond more effectively and this facility is very important to that mission,” he said.

For soldiers in combat areas the threat of chemical and biological warfare is an increasing threat, as well as possibilities of terrorism among civilian populations. The ability to deliver vaccines and counter measures, as well as for infectious disease outbreaks such as Ebola, have been a concern for the federal government, according to Dr. Ronald Hann, Director of the Defense Threat Reduction Agency. “In the past, DOD has contracted with individual, specialized companies for various projects, but doing so was both costly and time consuming with little coordination between the contractors,” said Hann.

In 2010, the White House asked the Department of Defense to create a facility that could centralize vaccine and drug manufacturing for military countermeasures. The White House also requested that Health and Human Services open three facilities for health needs of the general public. In 2013, DOD partnered with Nano Therapeutics to build the facility in Alachua and become the Department of Defense Advanced Development and Manufacturing facility.

In a press conference after the ribbon cutting, Hann said, “This location will provide a single multi-use facility for research, development and production of medical counter measures for biological threats, including terrorism and diseases.”

“This is about how do we change from business as usual to something different and use cutting-edge processes and equipment to get our nation’s war fighters what they need when they need it for a biological threat,” said Doug Bryce, Executive Officer for Chemical and Biological Defense.

The manufacture of biological counter measures and infectious disease antidotes does raise concerns about safety, but according to William Hensler, Senior Vice President of Global Operations at Nano Therapeutics, the company has addressed all these concerns.

They must follow both military and National Institutes of Health guidelines. All products must be contained in sealed rooms, and no harmful solid or liquid waste product will leave the labs. As far as security from outside threats, there are five levels of security including perimeter fences, security guards, multiple cameras and fingerprint scanner identification for all employees explained Hensler.

However, the purpose of the new facility will not be strictly military.

“We will also be providing a facility for commercial use of bio pharmaceutical research and development to other smaller companies that do not have the large production capabilities to do it themselves,” said Weaver Gaines, Nano Therapeutics Board Chair. “This facility has the ability to attract more bio technology companies and additional government contracts that will help bring more business to Alachua.

“It will also help keep some of the brain power from the University of Florida in the area, and attract other highly skilled employees to expand the high tech industry in the area. The impact will go beyond here with new technology being developed for multiple uses,” Gaines said.

Once the facility opens in February, it is expected to bring 150 new jobs to Alachua, with most employees making around $90,000 a year. The DOD received a grant that could be worth as much as $359 million, much of which could be brought into the local economy. “The facility and government contract could bring $180 million to the local economy,” said Alachua Mayor Gib Coerper.

The facility will also be adding money to the economy through use of local services. “Nano Therapeutics will be the single largest user of electricity in the city,” said Coerper. “This company will be a great opportunity for the local economy and will help bring more high tech industry to our town.”