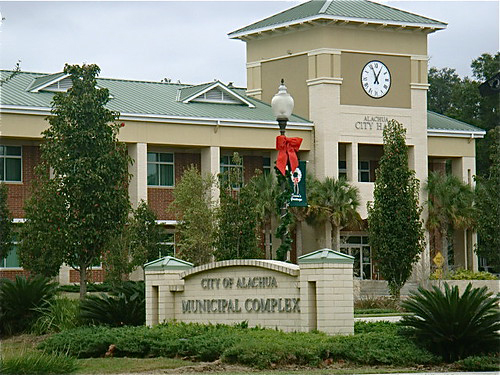 ALACHUA — The Alachua City Commission began its first meeting of the year on Jan. 13 on a high note. There were two special presentations, both involving Finance & Administrative Services Director Robert Bonetti. For the ninth consecutive year, the City of Alachua Finance & Administrative Services Department has been awarded the Certificate of Achievement for Excellence in Financial Reporting. The awards comes from the Government Finance Officers Association and is the highest form of recognition in government accounting and financial reporting. Alachua City Manager Adam Boukari presented the certificate to Bonetti. Bonetti then delivered the quarterly fiscal report on the city’s budget through the month of November 2019.

In other business, the Commission approved an ordinance for the final plat to revise a single lot within the existing subdivision of Pilot Forest. The property is located at 15703 NW 118th Place, at the southwest corner of the intersection of NW 118th Place and NW 157th Avenue. Currently the property has two existing buildings, a single-family dwelling and a detached accessory structure.

The proposed replat does not create additional lots, but is intended to modify the building setbacks since the existing residence is encroaching on the setbacks that were created by the approval of the Pilot Forest subdivision plat. The new setbacks would conform to current standards set forth in the City of Alachua Land Development Regulations. The Alachua Planning and Zoning Board had approved the request on Nov. 12, 2019 and forwarded it to the Commission for approval. Action by the commission was delayed pending the applicant obtaining all needed signatures for the plat since the mortgage had been sold to another financial institution after the Planning and Zoning Board hearing.